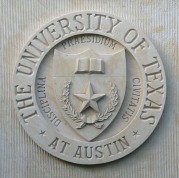 The buildings, in particular, have something they want to say, if only you would look up!

For those who traverse the Forty Acres on a regular basis, the campus can become a familiar blur of limestone walls and red-tiled roofs. But look closely. The buildings, especially those finished before 1940, are teeming with symbols, images, icons, and quotations. They are the thoughtful creations of architects, University faculty, and in a one case, a UT student. Meant to inspire and inform, the buildings’ designers collectively aspired to make the University of Texas campus a place like no other.

Unfortunately, many – perhaps most – of today’s busy students are oblivious to the messages written on the walls. Time to get to the next class is short, and besides, the live oak trees have grown to obscure the views. But for those who make the effort to look, the buildings have much to tell.

Below is a sampling.

Opened in 1924, the Biological Laboratories building was originally planned to be in the northwest portion of the original Forty Acres, at the corner of Guadalupe and 24th Streets, but was moved farther east to save the three oldest trees on the campus, now called the Battle Oaks. Intended to house the Departments of Biology, Botany, and Zoology, only botany remains. The building is generously decorated and deserves a close inspection. Between the second and third story windows, terra cotta renditions of Texas flora and fauna adorn the walls, and the University Seal, carved in limestone, guards the main north entrance.

Below: Look close! At each of the building’s corners, just below the eaves, are a pair of terra cotta panels that feature a “shield” divided into quadrants, each depicting an aspect of college life. Clockwise from the upper left, you’ll find: an open book of knowledge; the lamp of wisdom; a ten-gallon hat, representative of local culture (It is the University of Texas, after all.); and – what’s that, an “H?” It’s a football goal post, meant to symbolize extracurricular activities on campus.That a goal post was chosen wasn’t a complete surprise. When the Biological Labs building was being designed, the campus was involved in an extensive fundraising campaign to build Memorial Stadium, today’s Darrell K Royal-Texas Memorial Stadium. (Click on the image for a larger view.)

Named for George Garrison, a distinguished UT history professor, Garrison Hall was opened in 1926 as a social sciences building, and is today headquarters for the Department of History. Designed to be unmistakably Texan, limestone carvings of steer heads, along with terra cotta renditions of lone stars, cacti, and bluebonnets can be seen. Imprinted below the eaves are the names of statesmen from the Republic of Texas, among them: Houston, Austin, Burnet, Travis and Lamar. But Garrison Hall is best known for the 32 cattle brands on the building, carefully chosen from thousands of candidates, to represent various periods of ranching as a part of the history of the state.

Below: The Running W brand of the King Ranch. 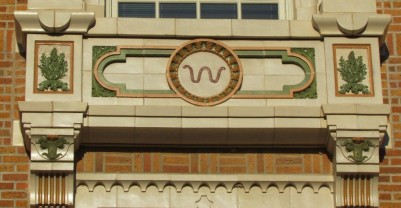 In the 1920s, as Garrison Hall was under construction, the novel use of cattle brands on a college building garnered national headlines, and the University was highly praised for creating a “permanent monument” to the history of the Southwest. Above is part of an article published in the Saint Louis Post-Dispatch. The gentleman is holding the oldest known cattle brand used in Texas, owned by Jose Antonio de la Garza and granted by the Spanish government (when Texas was a part of New Spain) in 1762. Today, the brand is found nestled under the west eave of Garrison Hall.

Above: A listing of the 32 cattle brands. More on the history of Garrison Hall can be found here. Click on image for a larger view.

Completed in 1932 and named for UT regent George Brackenridge of San Antonio, Brackenridge Hall was the first of a “men’s group” of residence halls, along with Roberts, Prather, and later, Moore-Hill Hall. In contrast to the symmetrical limestone “six pack” buildings that line the formal entrance to the University along the South Mall, the heavy use of brick and an informal composition give Brackenridge a more relaxed, residential quality.

Above: Brackenridge Hall soon after it was opened in the 1930s. Below: Brackenridge as seen today from the UT Tower observation deck in the late afternoon sun.

Above: A March 24, 1932 article from The Daily Texan. Click on image for a larger view.

The spacing between the top floor windows display icons of Texas ranch life. Unversity student Bob Willson proposed the idea to the Faculty Building Committee, which liked the idea and recommended it to the Board of Regents for approval. Among the images: a cactus, shotgun, a roll of barbed wire for fencing, a pistol in a holster, a boot with a spur, branding irons, a canteen, the all-important chow-wagon, and, of course, a longhorn. Initially, wildlife was to be omitted, though a coyote baying at a full moon and a coiled rattle snake found their way on to the building. Texas wildlife was to be the theme for a future men’s residence hall, but the idea didn’t survive. 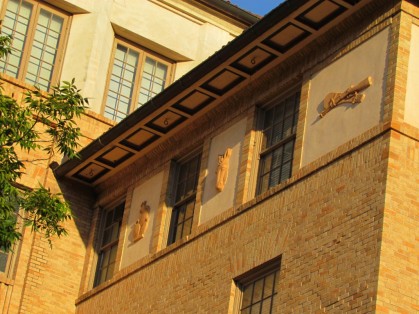 Above: Cactus, a horse head, and a shotgun are seen above the Brackenridge Hall patio. Below: a Texas Longhorn looks out from the west side of the building. 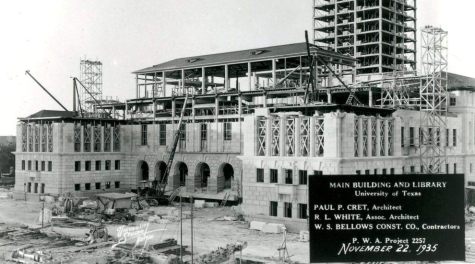 The Main Building, with its 27-story tower, initially served as the University’s main library. Today, the building is primarily used for administrative purposes,and most of the books have been moved elsewhere. But a life sciences library still exists here, and visitors can wander through the cavernous reference and reading rooms.

The east reading room, named the Hall of Noble Words, is a hidden gem on campus and a great place to study for those who find it. Massive concrete beams stretch across the ceiling, intricately painted by Dallas artist Eugene Gilboe. Each side of a ceiling beam is decorated with quotes within a specific theme, such as: freedom, education, friendship, and determination. The quotes were suggested by the University faculty at the request of Faculty Building Committee chair William Battle. It was Battle’s idea that the students seated below would occasionally take breaks from their studies, look up, and be inspired.

Above: The west side of the Business-Economics Building as it appeared in the 1960s. The Graduate School of Business building was added in 1973 and covered the entrance, and sculptor Charles Umlauf’s creation – “The Family” – has been relocated to the south side of the complex.

Designed in the late 1950s and opened in 1962 as the Business-Economics Building, University students quickly shortened the name to “BEB,” and sometimes called it the “Big Enormous Building,” as it was, up to that time, the largest classroom structure on the campus. It was also the first equipped with an escalator, though it only went one direction, upward to the next floor. It was the ongoing joke that the students and faculty would invariably wind up stuck on the top floor by the end of the day.

The BEB was divided into three sections: an office building for faculty to the north, a classroom structure to the south, and a connecting passageway that housed the infamous escalators, along with study lounges for students, and mock storefront windows used by marketing classes.

Above the top row of windows of the faculty offices are a series of fifty abstract ceramic reliefs designed by UT art professor Paul Hatgil. His whimsical creations not only added color to an otherwise all-brick facade, their stylistic rows of small, raised circles were meant to be reminiscent of buttons, as the many inventions of the 1950s – from computers to vending machines – had transformed the modern world into what was then called a “push button society.” 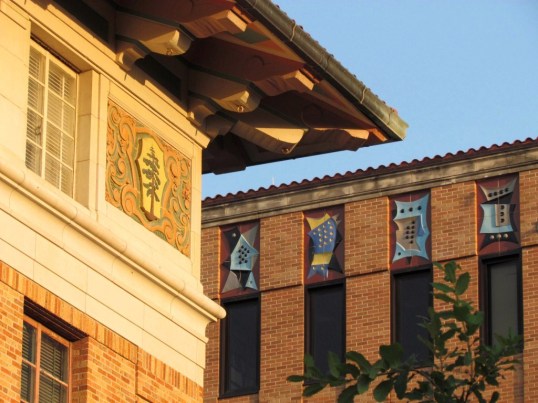 Above: Old meets new. To the left, Waggener Hall was the home of the business school from 1930 to 1962. The terra cotta decorations under the eaves portray the exports of Texas at the time, including a tree to represent the lumber industry. To the right is Professor Hatgill’s ceramic panels on the current business building. (More on Waggener Hall can be found here.)