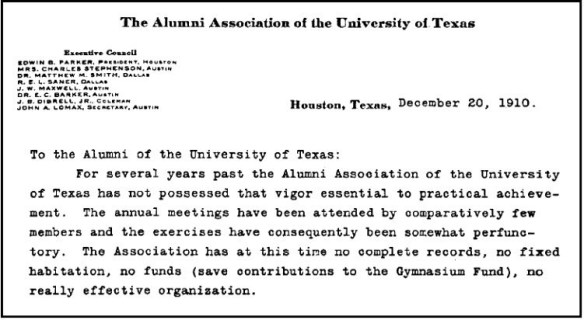 The message was direct, succinct, and dire. 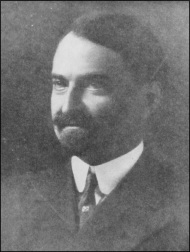 “The Alumni Association,” wrote Houston lawyer Ed Parker (right) in 1910, “has not possessed that vigor essential to practical achievement . . . [It] has at this time no complete records, no fixed habitation, no funds, no really effective organization. That such a condition should not be permitted to continue does not admit of argument.”

Founded in 1885 by the 34 members of UT’s first two graduating classes (one with a B.A. and the rest with law degrees), the University’s new alumni association seemed full of potential. By 1891, the Association boasted 250 members, and a committee led by Robert Batts met with the faculty and Board of Regents to explore ways the alumni might be of service.

The following year, the Association announced plans to help build a YMCA building near the campus. At the turn of the 20th century, YMCAs – with meeting rooms for student groups, cafeterias, study lounges, and gym facilities – were popular among colleges as a precursor to student unions. The project was eventually realized with the opening of the University YMCA (above left) at the corner of 22nd and Guadalupe Streets.

In 1899, the alumni raised nearly $1,000 to pay one-third of the cost of UT’s first athletic field, later named for Proctor James Clark. A year later, another $1,000 was pledged for a pair of marble busts – of former Texas Governor Oran Roberts and Sir Swante Palm – sculpted by Austin artist Elizabeth Ney. As governor, Roberts had ensured the passage of the 1881 legislation that created the University, while Palm, a Swedish immigrant who lived in Austin, had bequeathed most of his 12,000-volume personal library to UT.

Above: The alumni association’s first tangible gifts to UT were two marble busts of Oran Roberts (left) and Swante Palm. Today, they’re on display in the research room of the Briscoe Center for American History.

Scholarship fundraising had also begun, with the first $100 awarded in 1899. Soliciting donations, though, was strictly informal. For several years, members of the scholarship committee personally wrote or visited with their fellow alumni in cities and towns throughout the state, asking for one dollar contributions.

So, too, was the observance of Texas Independence Day on March 2nd. Since 1897, when UT students legally borrowed a cannon from the Capitol and fired it in front of the old Main Building (left), celebrating the birthday of the Texas Republic had become a favorite campus tradition. At the Association’s annual meeting in 1900, Bob Saner from Dallas suggested that the alumni should continue the custom. A special proclamation was created and received unanimous approval. It stated:  “Wherever two ex-students of the University of Texas shall meet on March 2, Texas Independence Day, they shall sit and break bread together and pay tribute to the founders of the Republic of Texas who made our education possible.” The tradition continues today, chiefly among the Texas Exes chapters, who often use their March 2 parties to raise funds for scholarships.

But by 1910, as the Association was completing its first quarter century, the group seemed to have lost momentum. Most of the activity centered on the annual meeting in June, in conjunction with spring graduation, and the agenda was primarily about electing new officers and appointing the following year’s alumni commencement speaker. Concerned voices were raised. The Austin Statesman reported that the 1903 meeting evolved into a general discussion on “why the alumni showed such a lack of interest in the affairs of the association.” Speeches were made, a committee was organized to look into the issue, but a definitive solution was elusive. 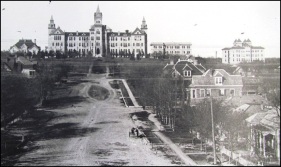 As for the 1910 gathering, Parker was unable to attend, hadn’t planned to run for an office, and didn’t know he’d been elected president until his predecessor, Will Crawford, personally visited with Parker months later. Completely surprised, he asked about the state of UT’s alumni affairs and was appalled. While dues were supposed to be a dollar a year, no one bothered to pay them, and there’d been no money in the Association’s treasury since 1905.

Above: The UT campus and University Avenue around 1910.

Parker agreed to take on the role as president anyway, and then requested his fellow officers – the Executive Council – to attend a Thanksgiving Day meeting in Austin. He proposed a significant and ambitious overhaul for the group, and with the Council’s input, established some short and long term goals. A month later, on December 20th, Parker sent a three-page circular letter to about 2,000 known alumni, effectively telling everyone, “We need to get our act together.”

Parker’s message was timely. Alumni associations for American higher education had been around since at least 1821, when the graduates of Williams College in Massachusetts founded a “Society of Alumni.” But it wasn’t until the 1900s that campus administrators widely began to realize the value of an organized alumni group as a part of the university community. There was fundraising, of course, but alumni were also contributing members of advisory committees and governing boards, advocates in political matters, promoters of higher education in their local schools, mentors and professional connections for students, and more.

The University of Michigan’s alumni group hired a full-time “alumni secretary” to assist the organization. Other colleges soon followed, and a national association of alumni secretaries was being organized to share ideas. At the same time, alumni newsletters and magazines, some of them published weekly, were becoming more common and connecting alumni in new ways. If Texas had waited much longer, it would have found itself behind.

Above right: Princeton University’s Alumni Weekly was first published in 1900.

Right: A ribbon worn by one of the “Medievals” at the 1912 annual alumni meeting and reunion.

Above: As part of the 1911 annual meeting, an alumnae reception was held in the Woman’s Building – the University’s residence hall for women – which stood where the Flawn Academic Center is today.

Parker’s letter was well received. One person claimed it would transform the Association “from a wishing organization into a working organization.” Through the spring of 1911, Parker sent several more messages to the alumni, inviting them to the June annual meeting, while UT President Sidney Mezes penned a personal note to the “Ancients” – the 1884 – 1893 graduates – encouraging them to attend the reunion.

Just over 250 alumni made the trip to Austin in June, which the organizers claimed was an “encouraging response.” An alumni barbeque at the Austin Country Club, a special alumnae reception on campus, the spring commencement ceremonies, and, of course, the class reunions, were all part of the schedule.

The business meeting was held in the second floor lecture hall on the east side of the Engineering Building, today’s Gebauer Building (right). There, it was announced that 815 of the approximately 2,000 known alumni had remitted their dues, which included 36 life members. John Lomax, an 1897 graduate, was introduced as the Association’s first full-time alumni secretary. Efforts to launch a magazine had been put on hold in favor of publishing an alumni directory. And of great interest to those present was the announcement of the “Alumni Room” as an official, on campus headquarters. 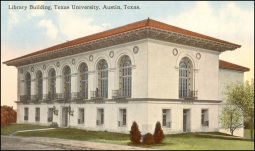 A new University Library building (known today as Battle Hall, image at right) was almost complete, and the first floor had been outfitted to house President Mezes and his staff. Since he was vacating his quarters in the old Main Building, Mezes presented his former office – room 119 – to the alumni. Outfitted with tables, chairs, a sofa, and even a private restroom, It would serve both as the office of the alumni secretary and a place for any visiting ex-students to gather and feel at home. 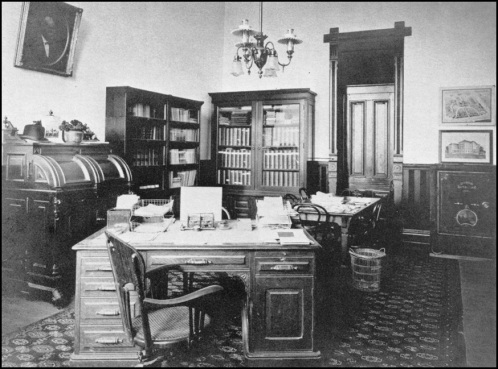 Above: The UT president’s office in Old Main was remodeled into the Alumni Room.

Along with furniture, the Alumni Room was filled with photographs and other items meant to encourage visitors to reminisce about their UT student days. Hanging on the wall next to the door was an image of the first, eight-person faculty from 1883 (left). Shelves on the west side of the room displayed the University’s first athletic trophies, along with a few team photos, and signed footballs and baseballs from special victories. In a cabinet were issues of the Cactus yearbook, and, later, extra copies of the Alcalde magazine. Elsewhere on the walls were individual portraits of alumni association presidents, a map of Texas that showed the enrolled student distribution by county, and an architectural rendering of a possible campus gymnasium. (For the alumni to build a gym was a longtime ambition of 1885 graduate Thomas Gregory. It was eventually reached in 1928, when Gregory, as president of the Association, launched the Union Project, a $600,000 fundraising effort to build today’s Texas Union, Gregory and Anna Hiss gymnasiums, and Hogg Auditorium.) 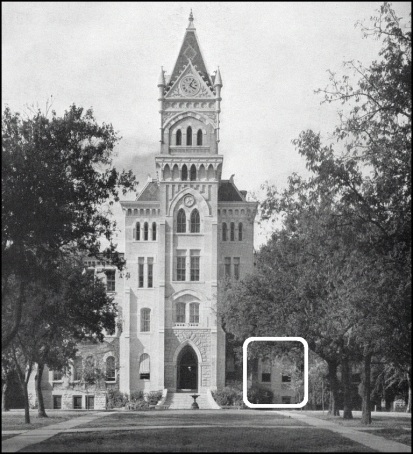 Above: Ex-Students visiting campus would enter Old Main through the south entrance, then turn east for a short walk down the hallway to the Alumni Room (highlighted).

Left: This water color rendering of engineering dean Thomas Taylor was drawn by 1905 graduate Ed Connor and was used as the cover for the third issue of the Alcalde magazine. Afterward, it was hung on the south side of the Alumni Room, in between a pair of windows, and remained there for years. Found today in the Alcalde’s offices in the present alumni center, it is, perhaps, the lone survivor of the Alumni Room.

Sources: The John A. Lomax, Will C. Hogg, and Harry Y. Benedict papers in the Briscoe Center for American History; The University of Texas Record, July 8, 1911; 1914 Cactus yearbook; “The Alumni Room” by Fritz Lanham, Alcalde, February 1914; Austin Statesman and The Daily Texan newspapers.