Our favorite color appeared a few years earlier than was once thought.

Above: A 1910 UT pennant in bright orange and white.

When did the Longhorn football team first don that distinctive, burnt orange color?

Orange and white made its first appearance in 1885, at UT’s inaugural baseball game against Southwestern University. After fifteen years of trying out other colors – from gold and white, to orange and maroon, to royal blue – the Board of Regents officially declared orange and white as UT’s colors after a vote of students, faculty, staff, and alumni in 1900. (The complete history is here.)

The bright orange and white had issues, though. The white stained easily on the athletic field, and the orange began to fade to a yellowish hue after being washed too many times. By the 1920s, opponents near the end of a football season would sometimes call the Texas squad the “yellow bellies,” which didn’t sit well with coaches or athletes.

For decades, it was believed that in 1928, UT football coach Clyde Littlefield initiated a change and ordered a darker-colored orange jersey that wouldn’t fade so easily. But recently, while scrolling through a microfilm copy of The Daily Texan from 1925 in the UT Archives, the author came across a short, two paragraph article buried on page seven of the September 19, 1925 issue. The article read:

“When crowds watch the Longhorns fight their way through one of the stiffest schedules of their career, the men will wear uniforms of a color slightly different from the proverbial orange and white, according to S. N. Eckdahl of the University athletic staff, who has been issuing equipment to the Longhorn players.

“As several other schools in the country claimed orange and white as their school colors, the University officials decided to adopt an orange and white which  should be Texas’ own. As a consequence, a combination of dyes was used to produce a shade different from the standard orange. The new shade is darker, being more of a burnt orange.”

The history will need to be corrected. It was Coach E. J. “Doc” Stewart (photo at right) who introduced the burnt orange color 90 years ago this month. The change seemed to have been made within the Athletic Department; the Board of Regents didn’t recognize the new hue until much later.

Burnt orange – or “Texas orange” – was used from 1925 until the Second World War, when the dye was no longer available. Team uniforms reverted back to their original bright orange color for almost two decades, until Coach Darrell Royal returned to the Texas orange in the early 1960s. 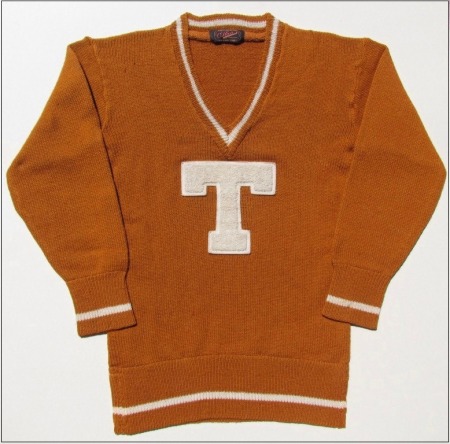 Above: A 1928 University of Texas football letter sweater. It was long believed that 1928 was the year a dark orange color made its first appearance, but a recent discovery has pushed the date back to 1925. The sweater is still likely the first version of a “Texas Orange,” and is almost a rust color. Both the sweater and the 1910 UT pennant are in possession of the author.