A few weeks ago, I attended a “book and paper show” in Austin, where booksellers from around the country gathered to sell old and rare books, magazines, sheet music, postcards, and similar items. Because most of the vendors were from Texas, there was an emphasis on books about the Lone Star State and the Southwest, and it was a good place to look for old “UT stuff.”

In the far corner of the back room, a gentlemen was unloading boxes of photos and papers, things he’d collected at estate sales over the years and were usually stored in boxes in his garage. It was a wide variety and completely unorganized; show attendees just had to hunt through it. After a few minutes, I hit upon a few things that were about to be tossed out: a series of lab reports from a UT physics class in the spring of 1909.

The reports were all written by the same lab partners, LeRoy Hamilton and Aubrey Tinsley “A.T.” Elliott, who were then sophomores studying electrical engineering. Each report was handwritten – likely by Hamilton – and enclosed in a tan folder. Printed on the front was the “School of Physics,” and blanks to fill in student names, experiment and table numbers, and dates assigned and completed. Inside the cover were instructions for the lab class and guidelines for writing a report. The grade was marked on the top right hand corner. Hamilton and Elliot received mostly 8/10, but one was a perfect 10.

Above and below: The “School of Physics” lab folder. Close-up of the front and instructions on the inside cover. Click on an image for a larger view.

From the covers, it looks as if nearly 50 experiments were performed through the spring. Among them: to measure the radius of curvature of a convex lens, the absolute determination of the volt, to measure the resistance of a coil of wire at different temperatures, and to measure the EMF [ electromotive force – another term for “voltage” ] of a cell by the Potentiometer Method.

In 1909, the physics lab classes were held in the basement of the east wing of the old Main Building, where the UT Tower stands today. The department was scattered on several floors throughout the building until the early 1930s, when it moved into the new Physics Building, today called Painter Hall.

Below is the complete write-up for experiment 42: the absolute determination of the volt. It earned a perfect 10 points. Would you give it the same grade? 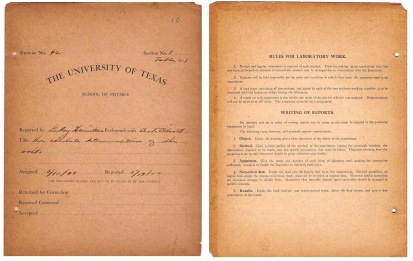