Each year, at the start of the fall semester, University of Texas football fans stampede to the stadium. They wear their favorite burnt orange, proudly wave the “Hook ‘em” hand sign, and look for Bevo, the longhorn mascot. While UT’s athletic teams have been known as the Longhorns since the early 1900s, fans might not know that the university’s first live mascot was a scrappy tan and white dog named Pig Bellmont.

Born in Houston on February 10, 1914, Pig was a seven-week old puppy when he was brought to Austin by L. Theo Bellmont, the university’s first athletic director and a co-founder of the Southwest Athletic Conference. (Bellmont Hall, on the west side of the stadium, is named for him.) An adventurous pooch, the dog didn’t want to remain confined to the family’s backyard, and followed his owner to work on the Forty Acres. The campus was full of attentive students, squirrels to chase, fields of bluebonnets, and plenty of trees. It wasn’t long before Pig was adopted by the university community, and for the next nine years roamed the campus as the ‘Varsity Mascot. 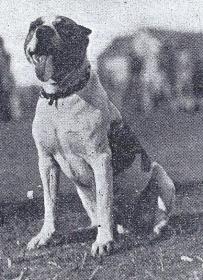 Each morning, Pig greeted students and faculty on his daily rounds. He frequented classrooms, and on cold days was permitted to visited the library (now Battle Hall). Pig regularly attended home and out-of-town athletic events, and it was said he would snarl at the slightest mention of Texas A&M. Though he wasn’t able to wear a letter jacket, UT students had a special brass “T” made to attach to his collar, and Pig was inducted as the only canine member of the T Association.

Pig was named for Gus “Pig” Dittmar, who played center for the football team. Gus, an honors history major, was known to slip through the defensive line “like a greased pig.” By chance in 1914, the athlete and the dog stood next to each other on the sidelines of a football game. The students noticed, of all things, that both were bowlegged, and from that moment the dog had a namesake.

During World War I, Pig looked after the cadets of the School of Military Aeronautics, which was sponsored by the university and housed on what is now called the Little Campus, where only Hargis Hall and the Nowotny Building remain. The school, dubbed the “West Point of the Air,” was a precursor to the Air Force Academy and introduced cadets to the basics of flying through a six-week course. At the conclusion of each session, Pig was always included in the class graduation photo and twice took the train ride to Dallas, where the cadets were transferred to continue their training. He never missed a hike and was always present for inspection.

On New Year’s Day, 1923, Pig Bellmont was accidentally hit by a Model T at the corner of 24th and Guadalupe streets. He was only injured, but no one realized how seriously until his body was found a few days later. Pig’s death was a tragic event on the campus, and the students decided to pay a final, fitting tribute to their beloved canine friend.

Above: Pig Bellmont’s funeral procession down Guadalupe Street. The University Methodist Church can be seen in the background.

For about two hours on the afternoon of Friday, January 5th, Pig’s body lay in state in front of the University Co-op on Guadalupe Street. More than 1,000 people doffed their hats and filed by Pig’s black casket, which was draped with orange and white ribbon. Promptly at 5 p.m., a funeral procession was organized. Led by the University Band, the mourners marched south on Guadalupe to 21st Street, then east to the old Law Building, where the Graduate School of Business now stands. Pig’s pallbearers were members of a new student group called the Texas Cowboys.

Northwest of the Law Building, under a small grove of three live oak trees, Pig’s eulogy was delivered by Dr. Thomas Taylor, dean and the founder of the Cockrell School of Engineering

“Let no spirit of levity dominate this occasion,” Taylor began. “A landmark has passed away.” 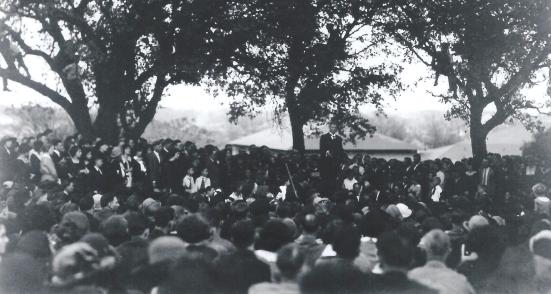 Above: Engineering Dean Thomas Taylor, standing in the center, eulogizes Pig Bellmont. Look close –  some of the spectators are in the branches of the trees. Click on an image for a larger view.

Pig was praised for his loyalty to the university, and compared to the faithful dog of Lord Byron. “I do not know if there is a haven of rest to which good dogs go, but I know Pig will take his place by the side of the great dogs of the earth.”

After the funeral, a marker was left to remind the students of their first mascot. His epitaph: “Pig’s Dead…. Dog Gone.” 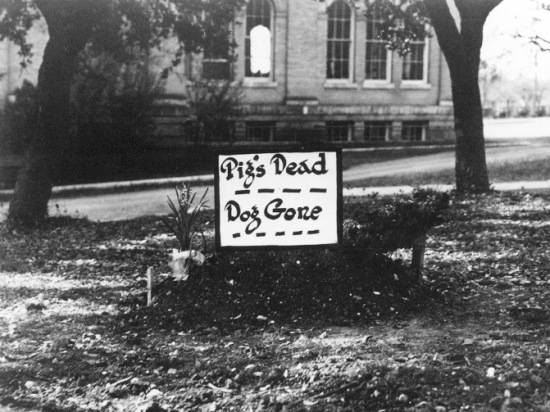