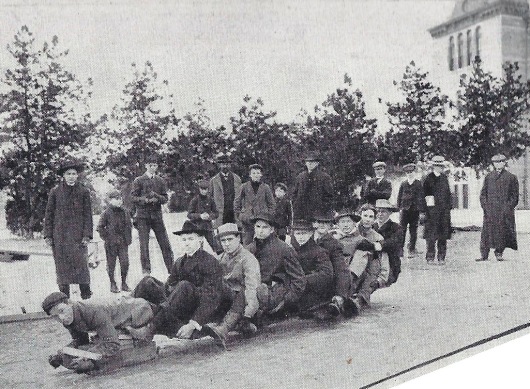 Snow! Sleet! Freezing rain! Words not normally included in an Austin weather forecast. Now and then, Old Man Winter manages a quick visit this far south, and the locals are treated to rare and wondrous sights: snowmen on the South Mall, icicles hanging from the Littlefield Fountain, snowball fights on the Drag, and on one occasion, a toboggan crammed with UT students rocketing across the campus.

The opening days of February 1905 were unusually chilly ones for most of the nation. A strong Arctic cold front delivered frosty temperatures and a blanket of snow that extended as far south as New Orleans. Highs in Memphis, Tennessee hovered in the teens, and a build-up of ice on the Mississippi River made navigation so dangerous that river traffic was closed outright.

Above: Snow on the Forty Acres. A view of the future South Mall looking toward the Victorian Gothic old Main Building, where the UT Tower stands today.

Austin was spared the worst, but didn’t entirely miss out on the party. The front arrived midday on Thursday, February 2nd, with a frigid wind and a steady, soaking drizzle. Temperatures continued to fall through the day on Friday, and the drizzle changed to freezing rain, then sleet, and finally snow. By Saturday, February 4th, the entire city was encased in a sheet of ice. The much-publicized brick paving of Congress Avenue was suspended at Fifth Street, buggy drivers on the treacherous roads didn’t know how to control their horses, a firewood shortage caused some to brave the elements and collect short-term supplies in the woods outside of town, and the fabled Moonlight Towers went unlit, which left much of the city in darkness.

Despite the miserable conditions, UT students dutifully arrived for their 9 a.m. Saturday morning classes. (At the time, classes met six days a week.) But the stubborn chill had seeped into the hallways and classrooms of the old Main Building, and with temperatures stuck in the low 20s, the University’s feeble heating plant simply wasn’t up to the task. After two hours of frigid lectures and complaints from a frozen faculty, President William Prather relented, officially dismissed classes, and closed the University. Just over 1,000 college students suddenly had a free Saturday and an ice-covered hilltop at their disposal. What happened next was inevitable.

Above: The 1905 headline from the Austin Daily Statesman.

Law student Bill “Mogul” Robinson took the lead. The popular blond-haired football star hailed from Missouri. Upon his arrival in Texas, it was rumored that he “broke maidens’ hearts unintentionally and athletic records on purpose.” Robinson found an empty wooden cracker box, and after a few tries, succeeded in coasting down the hill east of Old Main to the doors of B. Hall, the men’s dorm. Fellow students were eager to get in on the fun, but Austin’s stores weren’t exactly well-stocked with winter sports gear. Since traditional sleds were scarce, other objects were pressed into service. Chairs were surreptitiously robbed of their legs and the remnants used as sliding seats. Soap boxes, planks, wash tubs, and even a table from the B. Hall cafeteria were sent careening down the glassy hillside overloaded with boisterous students. “The University turned a cold, freezing day into a hill-sliding jubilee,” declared the Austin Daily Statesman, which dubbed the spectacle “The Great Frolic.”

Constrained by the social mores of the time, sledding for women was decidedly “unladylike” and strongly discouraged by Mrs. Helen Marr Kirby, the Dean of Women. Most co-eds remained indoors and watched from upstairs windows. A few dared to try and “skate” along the Peripatos — or “Perip” — as the walkway that encircled the campus was called. Two girls were seen pulling a third along in a box with ropes. “Several falls resulted,” reported The Texan student newspaper, but quickly assured, “always when out of sight of anyone.” 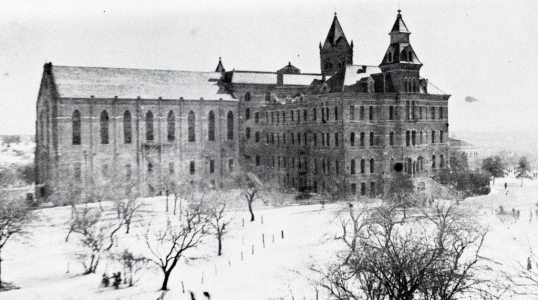 Above: The west side of a snow-covered old Main Building, seen from an upper floor in the Woman’s Building. The large north wing (on the left) housed the University Library on the first floor, and a 1,500 seat auditorium directly above.

Of course, boxes, chairs, and tables weren’t intended to be used as sleds, and didn’t last long. Within a few hours, the base of the slope was cluttered with debris, and better resembled “the remnants of a box house that had been hit by a Kansas cyclone.” But by then, the crowd had discovered better adventures. The footpath that led from Old Main to the southeast corner of the campus (where the McCombs School is today) was longer and more challenging. Turning and twisting between trees, and crossing campus drives, the rider had to be sure of his steering in order to avoid a collision and make it all the way to the corner of 21st Street and Speedway.

By late afternoon, a group of engineering students had cobbled together what they claimed was a makeshift toboggan (really an extended wooden sled) that provided room for up to a dozen riders at a time. With a mighty push from the top, the ponderous sled quickly built up speed, jumped the roads and flew down the hill. The front rider, hunched over and head first, controlled the rails and was responsible for navigation. Engineering Dean Thomas Taylor complimented his engineering students on their ingenuity and took a few rides on the sled himself. As the sun set, a lantern was placed at the head of the toboggan, and the fun continued well into the night. “The lantern, running across the campus at such a speed and as evenly as though borne along by the hands of some unseen spirit, was an object of great interest,” declared The Texan.

There were a few casualties — nothing serious — but among them was the redoubtable “Mogul” Robinson. (Photo at left.) He was one of the first to try the longer path, flat on his belly on a cracker box, with his feet dragging behind to act as rudders. But as the box gained momentum on the ice, the toes of his shoes were less able to steer or brake. About half way down the hill, Robinson collided with a campus tree. The box tumbled to one side and a stunned Mogul rolled to the other.

At that moment, 14 members of the Kappa Kappa Gamma sorority witnessed the incident from their premises, a two-story house across the street with an unobstructed view of the Forty Acres. All of them were, secretly or otherwise, smitten with the football star. When the box and its passenger hit the tree, 13 of the girls fainted with their Mogul. The last, Mary Willis Stedman, wrote a fictional account of the incident that appeared the following month in the University of Texas Magazine. Titled, “A Woman’s Heart,” it was the tale of a callous, frigid co-ed who at last discovered her feelings, but only after her beau, a student athlete named John Berkeley, died in her arms after a campus sledding accident:

“The impenetrable shadow was gone from her eyes; instead there burned the ineffably tender light in the eyes of a woman who loves — John Berkeley, never to know, gone from human ken, had mastered her, and there had awakened the woman’s heart.”

Stedman (photo at right) had altered the names and made no mention of the University or Austin. No matter. It fooled no one, least of all classmate Huling Robertson.

Robertson, a fellow football player and baseball captain, was described as “smart as four kinds of paint, sarcastic, satirical,” and would go on to earn a law degree at Yale. He was on the hill, saw Mogul’s wild ride, read the mushy fictional account in the magazine, and in response decided to pen his own version.

In the columns of the weekly Texan newspaper, Robertson waxed poetic:

For surely a glimpse of his flaxen locks
Gliding down in his cracker box
Could not have caused a wish that he
Might go afoul against a tree.
And thus a chance to show the world
That even a cold, emotionless girl,
If once she meet the turtle dove,
Hers is the truest, deepest love.

But wouldn’t a better ending be
That he was feigning injury?
And when to the rescue she had come
And beside him bending low,
Had raised his head out from the snow
And whispered to her so,
“Oh, by Gum!”

1 thought on “The Texas Toboggan Team”