For Berry Whitaker, the new Director of Intramural Sports for Men, it was to be the start of a new University tradition. A century ago, November 28, 1916, the Tuesday before Thanksgiving, Whitaker organized a special cross-country style two-mile race that started at the men’s gymnasium, went north of campus for a mile along Speedway Street, then doubled back to the finish. The race was open to any boarding house or fraternity that could muster a four-man team, though only the top three finishers would be counted in the overall results.

Instead of medals or trophies, though, the prizes awarded were appropriate for the upcoming holiday. The first place team would receive a Thanksgiving turkey, second place finishers given a chicken, and the third place team was to be awarded a duck. And just to clarify, the prizes weren’t coupons to be redeemed at the local grocery store for pre-processed, smartly packaged frozen fowl. The winning teams would receive live animals to take home and do with as they wished. 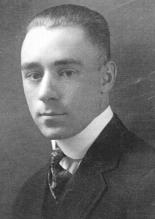 Whitaker was hired the previous June to be an Instructor of Physical Training and to launch an Intramural Sports program, the third – behind Ohio State and Michigan – on a university campus. For a starting salary of $1,500, he was charged with providing a formal organization and direction to the recreation activities that were mushrooming on the Forty Acres. The inaugural meeting of the student-led Intramural Council on October 6, 1916 is considered the birth of the program, and this year, the Division of Recreational Sports celebrates the centennial.

Above right; Berry Whitaker, the founder of UT’s Intramural Sports program for men. The Whitaker Sports Complex – the intramural fields and tennis courts about 2 1/2 miles north of campus – is named for him.

While the fledgling intramural program included the traditional sports of football, basketball, tennis, and baseball, Whitaker looked for opportunities to involve more students. A turkey race just before Thanksgiving provided something novel, and he hoped it would become an annual event.

The race was announced in The Daily Texan and entries were taken through the Saturday beforehand. In all, eight teams vied for the prized gobbler, including the boarding houses of Mrs. Smith, Mrs. Walker, and Mrs. Hopkins, along with the Phi Kappa Psi, Sigma Chi, Acacia, and Delta Tau Delta fraternities.

On Tuesday afternoon, under partly cloudy skies and with light northern breezes, Whitaker started the race with a starters pistol. University student Roy Henderson volunteered to drive his Model T Ford in front of the runners to clear any traffic. In less than 15 minutes, the heavily favored Mrs. Walker’s boarding house claimed first place, as half of its runners were also on the UT Track Team. Who won the duck and the chicken wasn’t mentioned in the Texan, which by Wednesday was full of stories about the Thanksgiving Homecoming celebrations, the football game against the A&M College, and the upcoming presentation of a steer that would later be named Bevo.

As for the turkey race, the 1916 version was the only one. The United States entered the First World War the following April, and most campus activities were directed toward the war effort. Whitaker, along with UT Athletic Director Theo Bellmont, enlisted in the U. S. Army. When peace was achieved in November 1918, Whitaker returned to Austin only to be drafted as an assistant football coach in 1919, and then promoted to UT head football coach the following year, all while still managing the Intramural Sports program. Whitaker retired from coaching in 1922 (with an admirable three-year 22-3-1 record), but never tried to revive the Thanksgiving turkey race. 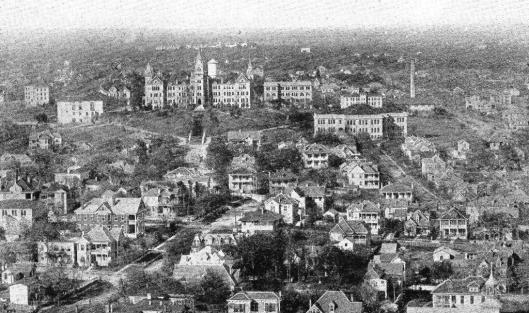 Above: The UT campus in 1916, with the old Main Building, as seen from the Texas Capitol dome.

1 thought on “Race for the Turkey”