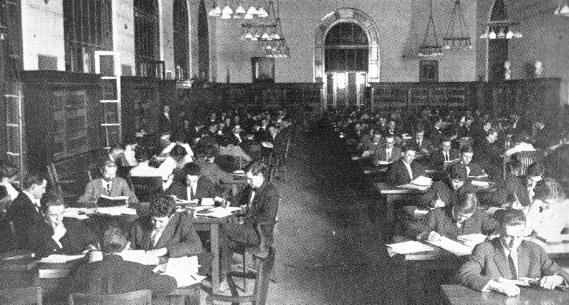 Above: Before 1917, coats and ties were the customary dress in the University Library, regardless of the weather. 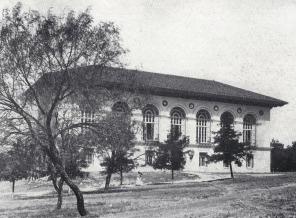 It was a fine day for a rebellion.

Friday afternoon, May 25, 1917, was bright, sunny, warm, and humid. The kind of late spring day that usually precedes a long, steamy summer.

For University of Texas students, the academic year was coming to a close. Term projects were due, along with one last round of quizzes, before final exams and then commencement ceremonies in mid-June.

The University Library – today’s Battle Hall (photo above left) – was a popular place this time of year.  Opened in 1911 and partly inspired by the Boston Public Library, its spacious
reading room was a great improvement over the too-crowded previous quarters in the old Main Building.  At a time before the invention of air conditioning, architect Cass Gilbert 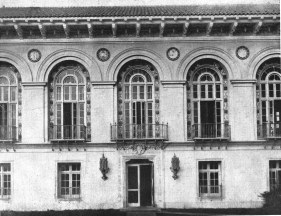 deliberately positioned the library just to the west of Old Main, near the top of the slope in the middle of the Forty Acres. Facing east and with the reading room on the second floor, the tall, arched windows could be opened to catch the southeastern breezes from the Gulf of Mexico, and help to mitigate the heat in the warmer months. To further help with air circulation, customized screen doors were created and fixed to the front entryway. (Photo above right.)

On this particular Friday afternoon, a small group of male UT students arrived for some late day studying, but looked decidedly different from their fellows. While there was a firm classroom dress code of suits and ties for men and dresses for women, the library wasn’t a classroom, and on this warm day, the students decided to leave their jackets at their west campus boarding house and visit the library in shirt sleeves.

After just a few minutes, Wilson Williams, officially the library’s Supervisor of Gifts and Exchanges, but better known on campus as the “silence restorer” of the reading room, swooped down upon the group with the peremptory command, “Coats on!” 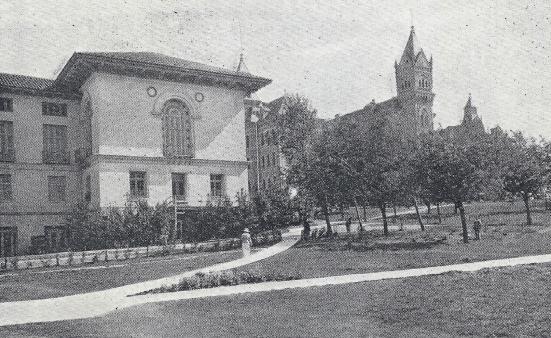 As the students had left their jackets at home and couldn’t comply, they attempted a parley. Williams explained they had violated a well-established guideline of dress. The students asked whether the rule might be overlooked this one time, saving them the trouble of having to trudge home just to don jackets on a hot day.

Unmoved, Williams insisted, but the students persisted, and finally demanded to see the written rules that governed library dress and conduct. Williams reluctantly admitted that there was no formal regulation that required jackets be worn, but it had been a longstanding custom since the University opened in 1883.

To the students, though, practicality outweighed an unnecessary tradition. The group, confident in their victory over the library administration, remained at their seats in shirt sleeve comfort. Within a few minutes, a dozen other UT compatriots had peeled off their jackets, and before the library closed for the day, every male student had joined in the uprising. For the hapless Mr. Williams, a longstanding custom was no more. But for the students, a new tradition was born. Coats and hot days were not to meet in the library again. 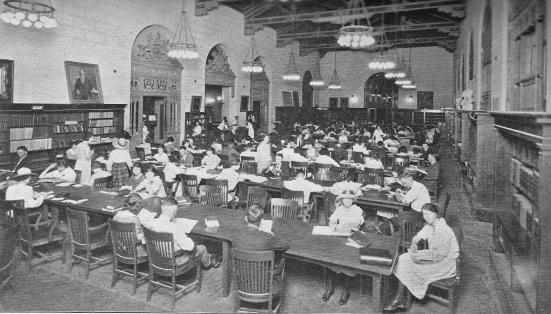 Above: After 1917, UT students in the library studied in their shirt sleeves on warm days. Click on an image for a larger view.