Above: In the 1920s, Texas Independence Day was reserved for pushball!

Texas Independence Day – March 2nd – has long been celebrated on the University of Texas campus. In 1897, a group of law students formally borrowed a cannon from the Capitol grounds and fired it repeatedly in front of the old Main Building. In recent years, the Tejas Club has annually hosted a 7 a.m. breakfast to honor seniors, faculty, and UT administrators, and toasted the state that provided for the founding of the University. Texas Exes chapters worldwide have traditionally gathered for what is often the main event of the year, and raised funds for UT scholarships. 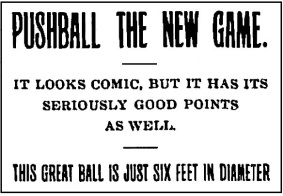 In 1912, the usual firing of a cannon and a formal Texas Independence Day assembly in the auditorium of Old Main was expanded to included a new activity: a pushball game. The sport was invented by the Norton, Massachusetts Athletic Association in 1895, and quickly found a following at nearby Harvard University. “It looks comic, but it has its good points as well,” declared the Austin Daily Statesman. (Image at right.) The pushball was a six-foot diameter round leather ball, often compared to an overgrown soccer ball, which weighed about 65 pounds when fully inflated. Played on a standard football field with eight men on a team, the object was to push, carry, roll, toss, or by some other means move the ball across the opponent’s goal line. Blocking and tackling were allowed, holding and fighting were illegal. At Harvard, students played pushball several afternoons a week with formal contests held during the halftime periods of football games. “It bids fair to rival football in popularity,” the Statesman claimed. Over the next several decades, the sport did receive some national attention and was played at universities as far away as Stanford, but it never seriously challenged football for recognition.

University of Texas students, though, were keenly aware of the new game and eager to give it a try. By 1909 The Texan was calling for it to be played on the Forty Acres. “Those who have watched Push Ball contests at other colleges and know of the great sport connected with these exhibitions cannot but wonder why the Push Ball has not reached Texas.” During the spring, students had initiated a movement to purchase a pushball and hold a game before the end of the term. Unfortunately, the cost was nearly $250, a monstrous sum at the time, easily more than the total expenses a UT student would incur over an academic year. Pushball was placed on hold, but not for long.

In the spring of 1912, Professor Carl Taylor took on the added responsibility as coach of the UT Track team. He’d played pushball as a student at Drake University in Iowa, knew of the interest in the sport in Austin, and convinced the Athletic Council to purchase a pushball for University use. It arrived about February 1st and was on display in the Co-op, then housed under the massive oak staircase in the rotunda of the old Main Building. The first contest was set for Saturday, March 2nd – as part of the Texas Independence Day festivities – between the freshmen and sophomores. 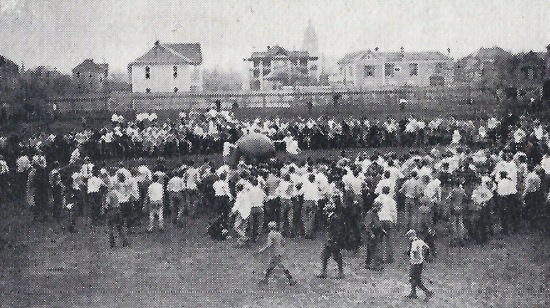 Above: A view of the inaugural 1912 pushball contest on Clark Field, about where the O’Donnell Building and Gates-Dell Computer Science Complex stand today, with the dome of the Texas Capitol in the background.

It had rained all morning, but a large crowd of curious onlookers gathered at Clark Field, UT’s first athletic field, on the appointed day. Just after 3 p.m., the male contingent of the freshman class arrived first and gathered at the south goal, their faces daubed with red paint to distinguish them from their opponents. The sophomore class soon followed, marched into the stadium in a double line, and took up residence on the north end of the field. Both groups heard pre-game speeches from their captains. Grady Niblo addressed the sophomores, while Louis Jordan, the only freshman selected to play on the Longhorn football team, was chosen to lead the first-years. After class yells were shouted, the pushball, accompanied by the University Band, was rolled onto the grass and ceremoniously placed on the 50-yard line. The freshmen and sophomores lined up en masse behind their respective goal lines, Coach Taylor raised his starter’s pistol, pulled the trigger, and – bang! – an estimated 370 students surged onto a thoroughly muddy field and sprinted for the ball waiting at the center.

“A fleet sophomore hit the ball first,” reported the Statesman, but several freshmen arrived an instant later. “For a minute or two it seemed as though it was an impossibility to make the ball budge one way or another. Slowly but surely, though, the freshmen succeeded in forcing it toward the sophomore goal inch by inch.” Suddenly, the ball was raised into the air and “spectators witnesses one of the most thrilling sights that it is possible to see on an athletic field.” For the next twenty minutes, the ball was either rolling on the ground or flying through the air, prodded, pushed, and lifted by mud-caked students who were either trying to get to the ball or blocking someone from the other class. The freshman had moved the ball to within fifteen yards of the sophomore’s goal when time was called. After a short intermission, a second period was played, though limited to twenty players on a side. In the end, neither class scored and the contest was declared a tie, but all agreed that the pushball game was fun.

For the next fifteen years, pushball continued as a Texas Independence Day tradition on the campus, though the sophomores almost always won. It was discontinued in the late 1920s after the ball itself was worn out and a series of injuries to participants raised concerns.

Above: The 1923 Pushball game had some students climbing the goal posts.

Above: A 1925 cartoon of the annual pushball game. Students who participated wore old or worn out clothes, as few shirts or pants escaped being muddied or torn.