Above: The image of Hermes, patron saint of the business school, is displayed on the west side of the Texas Union building, along with the patron saints of law and engineering.

Choosing a patron saint can be complicated. Just ask the business school.

Business classes were first offered on the Forty Acres in 1912, initially organized as a department under what was then the College of Arts and Sciences. But after a decade of rapid and prosperous growth, it was time for the department to leave the nest and fly on its own. In early April 1922, department chair Spurgeon Bell learned that UT President Robert Vinson planned to recommend a separate School of Business Administration to the Board of Regents. The regents’ approval was assured at their upcoming July meeting, and Bell would be named the school’s first dean.

Bell shared the exciting news with his students, who quickly set about planning a celebration. With Bell’s encouragement, the business students met Friday, April 7th in the auditorium of the old Law Building (where, perhaps appropriately, the Graduate School of Business Building stands today). A committee was appointed to organize the first annual business administration banquet, to be held in early May. A second committee addressed the issue of a business school identity.

Above right: The old Law Building, near the corner of 21st and Speedway Streets, where the Graduate School of Business Building stands today. The houses in the upper right have been replaced by the Perry-Castaneda Library, and the field in the upper left is now the Jester Center Residence Hall.

By 1922, the University’s engineering and law schools had mascots – “patron saints” – around whom their respective students and alumni had developed a healthy espirit de corps. The law school’s Peregrinus, or “Perry,” (image at left) was invented on a chilly afternoon in December 1900, during a class in equity. The professor was lecturing on Ancient Rome and the praetor peregrinus, a traveling magistrate who administered justice in the less populated regions of the Roman Empire. An unprepared student in the class was quizzed on the subject. “I don’t know,” he mumbled. “The peregrinus was probably some kind of animal.” The class burst out in laughter, but fellow student Russell Savage, sitting in the back of the room next to a chalk board, doodled a likeness of the imaginary creature that was later adopted as the law school mascot.

With four legs, a bushy tail, and a long beak, “Perry” was meant to symbolize the prowess of lawyers in their chosen profession. A wooden likeness of the Peregrinus was commissioned, and fashioned by local woodcarving master Peter Mansbendel. Kept secure, it made special appearances and attended the law banquets where it was ceremoniously passed from the graduating seniors to the juniors.

Above: Senior law students carry the Peregrinus at spring commencement.

Meanwhile, the engineers have claimed Alexander Frederick Claire, or simply “Alec”. Once a character in a popular song, Alec took on physical form in 1908. A group of engineering students visited a local beer garden, discovered a five-foot tall wooden statue of a medieval Falstaff, and decided to permanently “borrow” him. (See: The Thrilling Adventures of Alec!)

The patron saints of engineering and law had storied histories, helped to fuel an ongoing campus rivalry between the two schools – both mascots had been kidnapped by the “enemy” – but most important, they provided a symbol of pride and common loyalty. The business students wanted to join the fun, and sought an icon they could call their own.

Initially, the mascot committee considered using the shark. “Because of the prevalence of calling students in the [business] department sharks,” explained The Daily Texan, “it was suggested that an insignia of a shark be used to denote the department.” It was an obvious choice, as much of the campus had nicknamed business students “sharks” for years. But it provided no central character around which the school could rally, and, quite frankly, the label wasn’t always a positive one. Professor Bell urged his students to try again, and look for a mascot that represented the best in business endeavors. For the next several weeks, the committee agonized over the decision.

On the evening of Monday, May 8, 1922, business students and faculty gathered at the Stephen F. Austin Hotel for their first annual banquet. As part of the proceedings, the mascot committee revealed their final recommendation: Hermes, the Ancient Greek god of commerce, who was noted for his eloquence, speed, shrewdness, and wisdom. The idea met with the instant approval of everyone, and a framed “rough copy” of the new patron saint was placed on the head table.

Over the summer, as expected, the Board of Regents officially created the School of Business Administration. “Mr. and Mrs. Texas University announce the arrival of a new son, B. A. School,” reported the Texan. “The rapid development of the business training classes has been phenomenal. With the creation of a separate school, this division of the University will have greater opportunities for growth and improvement.”

In October, as the academic year began, business students pursued a better representation of their new patron saint. They contacted Peter Mansbendel, the same master woodworker who had helped the law school with the Peregrinus.

Several designs were considered, including one of Hermes sitting on a pot of gold, but the most popular was a standing Hermes with an American Bald Eagle at his feet. Mansbendel fashioned a miniature prototype out of clay that was officially approved and accepted at a business school assembly on November 28th. Fundraising for the final version began in earnest with the spring, but the needed monies weren’t acquired in time for Mansbendel to complete the project for the 1923 banquet. Instead, Hermes was readied over the summer, and then spent many months safely locked in a vault owned by the American National Bank in the Littlefield Building downtown. He finally made his debut at the May 12, 1924 business banquet, and was the star of the show.

Above right: The original clay rendering of Hermes.

Thirty-eight inches tall and made from pine, Mansbendel’s Hermes wears winged sandals as a symbol of his swiftness. With his left hand near his heart he holds a caduceus, a staff with two entwined snakes that was a symbol of commerce to the Ancient Greeks, and declares Hermes the authority of strategic negotiations. In his right hand he carries a bag of gold, a trophy of his successful commercial transactions. An eagle sits at his feet, evidence that the business school’s Hermes is “one hundred percent American” despite his distant origins. For UT business students, their patron saint is a symbol of strength, success, innovation, and efficiency in the commercial enterprise.

Above: Peter Mansbendel’s rendering of Hermes.

While Hermes was kept safely out-of-sight for most of the year, other schools, perhaps jealous, schemed to capture the patron saint for themselves. At the1927 business banquet, a contingent of law and engineering students conspired together, and rushed the banquet floor with the intent to steal Hermes away for their own evil purposes. A brief but raucous wrestling match ensued, and the unified business students managed to repel the invasion force. Since then, no one has dared to attempt a patron saint-napping. 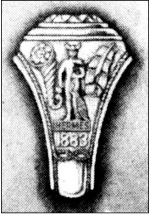 For another two decades, Hermes was a regular guest at the annual business banquet, but after World War II, when a wave of returning veterans nearly doubled UT’s enrollment in just a few years, the event became impractical. Instead, Hermes was placed on display in Dean J. Anderson Fitgerald’s office in Waggener Hall. Through the 1950s, the patron saint could be seen on the senior rings of business students (photo at left).

Today, Hermes is still a proud tradition of the McCombs School of Business. He stands in the undergraduate student office, surveying his dominion, and inspires business students to be their best in leadership, innovation, ethics, and entrepreneurship.