The Moonlight Prowl is a nighttime walking tour packed with anecdotes of student life, campus architecture, traditions, and UT history. With content drawn from newspaper accounts, professors’ memoirs, and the UT archives, the Prowl is intended to help personalize the University, explore its history, and have some fun.

How much does it cost? The Moonlight Prowl is free, though the charge is doubled for Oklahoma Sooners. 🙂

Do I need to RSVP? An RSVP is appreciated but not required. You can send me a quick email here, or RSVP via Facebook event.

Where do we meet? We’ll gather on the Main Mall in front of the UT Tower.

When does the tour begin? Traditionally, the Prowl begins at 8 p.m., when the UT Tower chimes have sounded their last for the day. 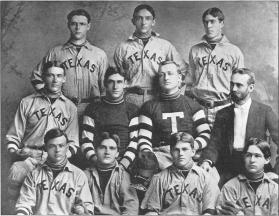 Can anyone attend? Everyone is welcome. But parents who want to bring small children are cautioned that the wee ones generally get bored quickly, and want to either race down the South Mall or jump into Littlefield Fountain.

Is there a prerequisite? Lots of UT courses have prerequisites – why not the Prowl? To attend the tour, all Moonlight Prowlers must be able to point to the UT Tower and say, “That’s the UT Tower.”

What if it rains? If at all possible, the Prowl will go on rain or (moon)shine. Some of the best Prowls have taken place under a steady sprinkle. If it’s raining, bring umbrellas and we’ll adjust the tour stops to be mostly indoors. If there’s a severe storm at Prowltime, or one is imminent, we’ll look at rescheduling.

Do I need to bring a flashlight? Nope. I’ll bring the Official Prowl Flashlight, known around NASA as the “OPF.”

Is this an “official” UT program? No, the Moonlight Prowl is not sponsored by the University of Texas. Think of it as a hobby that’s gotten out of control. I enjoy learning about the University’s history and sharing what I’ve discovered, and conduct the tour as a volunteer.

This will be Moonlight Prowl number 662. A little history about the first tour in 1988 is here.

In 2000, the Moonlight Prowl was a “Best of Austin” choice in the Austin Chronicle here.

See you on September 1st!