They’re nearly 600 members strong. They travel the world, provide scholarships for UT students, are regulars at local cultural events, and are experts on the ever-expanding Austin culinary scene. They work out at RecSports, play bridge at the alumni center, and volunteer on campus to help with everything from spring commencement to UT Remembers.

For the past 35 years, a busy Retired Faculty-Staff Association, or “RSFA,” has been keeping its members connected to each other and to the University.

Above right: RFSA members gather for banquet each semester.

The idea of an organization for UT retirees first originated with John Calhoun (photo at left). A 1905 graduate, Calhoun joined the mathematics faculty in 1909, later served as the University’s comptroller, and was appointed president ad interim from 1937 – 1939.

Calhoun was perhaps best-known for his passion for live oak trees, and was primarily responsible for their prominence on the Forty Acres. Calhoun started with four live oaks – transplanted from nearby Pease Park – that still grow on the south side of Sutton Hall. The oaks that shade the walks near and along Guadalupe Street were planted in 1928, and in the 1930s, Calhoun successfully argued for more live oaks on the West Mall, South Mall, and around the Main Building. He later drew a map of every tree on campus with detailed descriptions of those with interesting histories. It’s still consulted by the University’s Landscape Services.

When Calhoun retired in 1942, he wanted to continue to associate with his longtime UT friends, and created the “Die? No, sir!” or “Dinosaur Club.” The group’s purpose was simply to prevent its members from “fossilizing prematurely.”

Members included all UT faculty and staff over 70 years old, or were retired or on modified service “whether they desired membership or not.” Curiously, though, the group was limited to men.”No woman ever reaches the age of 70,” Calhoun joked. “Anyhow, men and women tend to see too much of each other.” (Perhaps Calhoun was trying to escape a long list of “honey do” projects that were waiting for him at home.)

Calhoun drew up a constitution for the club.There were no dues and only one officer, the secretary, who acted as “president, secretary, corresponding secretary, recording secretary, and treasurer.” It was the secretary who called meetings and kept a roll of the members. As for being treasurer of a group without dues, Calhoun specifically wrote that “he shall have no duties, no emoluments, and no responsibilities.” Since Calhoun was UT’s comptroller for 12 years, this part of the office was likely the most appealing and why he included it in the by-laws. 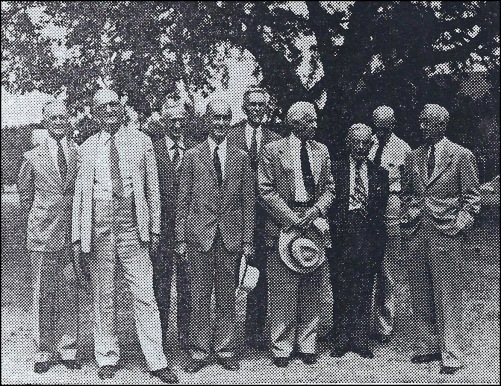 Above: A few members of the Dinosaur Club pause for a group portrait. Chemical engineering professor Eugene Schoch, second from left, also founded the Longhorn Band. William Battle, fourth from left, taught Greek and classical studies, designed the UT seal, started the University Co-op, and was an important chair of the Faculty Building Committee. John Calhoun is on the right.

The group was low-key and informal, and its members seemed to like it that way. The club usually met for lunch at the Texas Union and discussed current affairs on the Forty Acres, though they were sometimes used as a resource by the University administration. After all, the combined membership had given more than 1,000 years of service to UT, and they were happy to share their experience and advice.

The Dinosaur Club continued for several decades. In 1982, under the guidance of UT President Peter Flawn, a more formal Retired Faculty-Staff Association was organized – and open to both women and men!

1 thought on “The Dinosaur Club”