A recent discovery adds to what we know about the UT Tower. 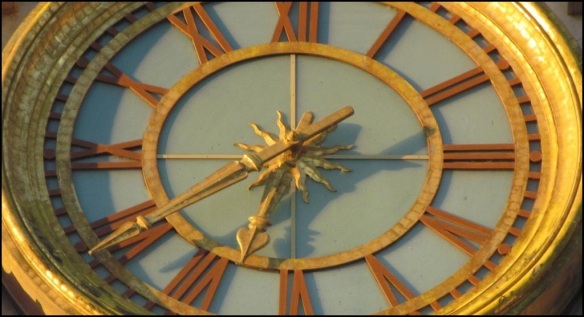 Above: The rim and hands of the UT Tower clock are gilded with gold leaf. A recent discovery has found that the Tower originally had much more gold. 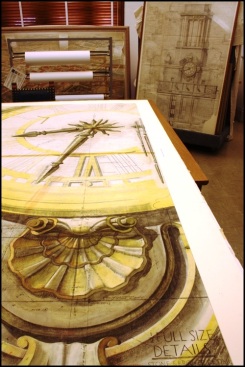 Behold a room of treasures. Tucked away on the ground floor of Battle Hall is the Alexander Architectural Archives, a vast collection of more than a quarter-million drawings, tens of thousands of photographs, letters, and building models. It is the largest resource of its kind in the state.

For those interested in UT’s architectural history, this is the mother lode. The archives preserves the designs, blueprints, and correspondence for most of the University’s buildings, including those that have long since disappeared from the Forty Acres.

There are hundreds of drawings for the Main Building and Tower alone. Some are of more pragmatic details: the schematics for the plumbing, for example, or the parts of a window. But others are highly-detailed, hand-drawn, breathtaking designs, and often in color. They took days or weeks to prepare, the shading on a building added one meticulous pencil line at a time. 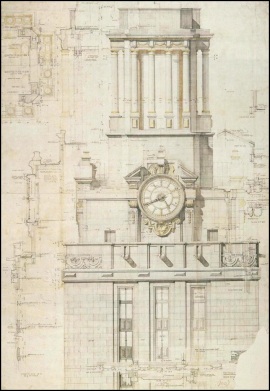 Above: The reading room of the Alexander Architectural Archives. On the table in front is a color rendering of the Tower clock at half scale, while framed in the back is drawing number 100, a detailed look at the top of the Tower.

Of these, one of the best-known is listed as “drawing number 100” (photo at right). It’s a 5 x 3 foot view of the top of the Tower, with all of the ornamental features intended by architect Paul Cret carefully labeled. Because it’s is so admired, it has been specially framed and usually sits on a dolly toward the back of the reading room. After more than 80 years, UT officials still consult it.

One of the drawing’s more curious details is the use of gold leaf. As anyone who’s seen the Tower knows, the rims and hands of the clock faces are gold. From articles found in The Daily Texan, the gold leaf was applied in October 1936, just a few months before the Main Building was officially dedicated in February 1937.

A closer inspection of the drawing, though, shows that gold leaf was also planned to highlight the limestone carvings around each of the clock faces, along with the belfry at the top of the Tower. Similar instructions for gold leaf appear on other drawings. 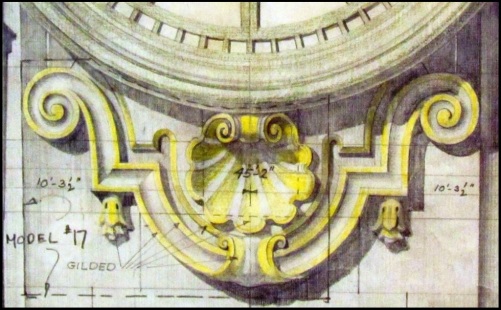 Above: A close-up of drawing 100 in the area just below the clock. The term “gilded” can be seen in the lower left with arrows pointing to the highlighted parts of the carving. Click on any image for a larger version. 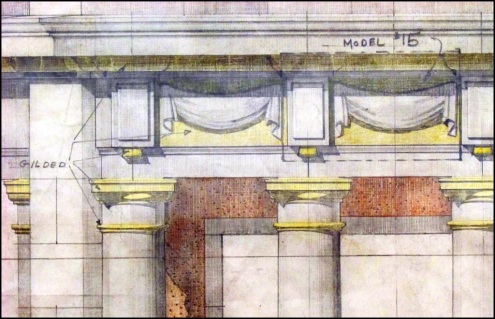 Above: Just above the belfry, more sections are labled “gilded,” including the capitols of the Doric columns, and the areas around the carved bunting along the top.

Was all of that gold leaf actually applied? For years, the general consensus was no. There didn’t seem to be any record of it in the archives, though there weren’t any accounts of placing gold leaf on the clock faces, either, and we certainly know that happened. It may be those records were lost. But there was also no trace of the gilding on the Tower. While the weather may have removed most of it over the years, there ought to be some remnants still present in the protected nooks and crannies of the limestone carvings. The Tower, though, was clean. Given the evidence – or lack of it – it was natural to conclude that when the Main Building opened in 1937, the gold leaf was limited to the clock faces.

Earlier this fall, I was researching another UT history topic and happened upon a 1943 film about Austin on the Texas Archive of the Moving Image web site. Produced by the Chamber of Commerce, it was titled “Austin, the Friendly City” and relayed the experiences of a fictitious family who had just moved to the Texas capital. The film was a little grainy and the colored was faded, but about halfway through (at the 16:10 mark), there was a shot of the Tower’s observation deck and the clock. It didn’t look quite right. 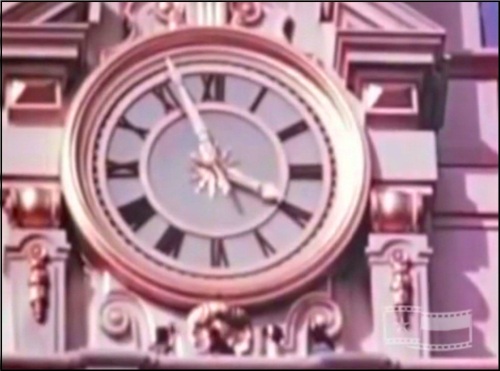 Above: A screen shot from the 1943 film “Austin, the Friendly City.”

The scene was filmed in the late afternoon, but there were pieces around the clock face that were “shiny,” and reflected the sun differently from bare limestone. They were also gold in color, while the rest was a light gray. I compared a screen shot from the film with a copy of drawing 100, and the gold areas matched just right. Since the film was made just six years after the Tower opened, the film might be the earliest color close-up image we have, and if gold leaf was used, it would still be readily apparent. To be certain, though, more evidence was needed. 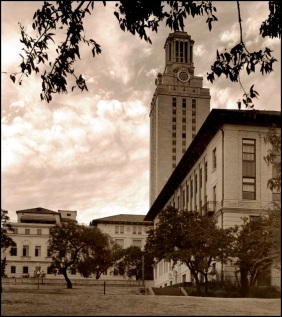 A search through the Alexander Archives was disappointing. As mentioned above, any documentation of the use of gold leaf on the clock faces or elsewhere had either been lost or were hiding in an unexplored folder. Instead, the hunt led to the Briscoe Center for American History, home of the UT Archives and another impressive collection of photographs. One day, while combing through a massive folder of images of the Main Building, magnifying glass in hand, I stumbled upon a 1938 black and white photograph of the Tower on a partly cloudy day, and where the angle of the sun left the side of the Tower in the image in shadow (image at left). Most of the pictures had been in full sunlight, and the bright white limestone made it difficult to tell if it had been highlighted with gold leaf. But in shadow, the differences between limestone and gold were unmistakable. Once I learned how to search for it, the gold leaf was apparent in other images, too. The University had indeed followed through with Paul Cret’s designs; the Tower once sported a great deal of gold leaf. 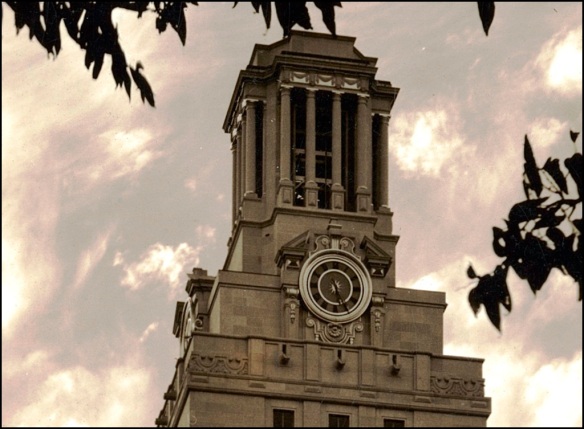 Above: Surprise! When the UT Tower was dedicated in 1937, it was fancily dressed in gold leaf around the clock faces and up by the belfry, all according to architect Paul Cret’s original designs. Click on the image for a larger view. 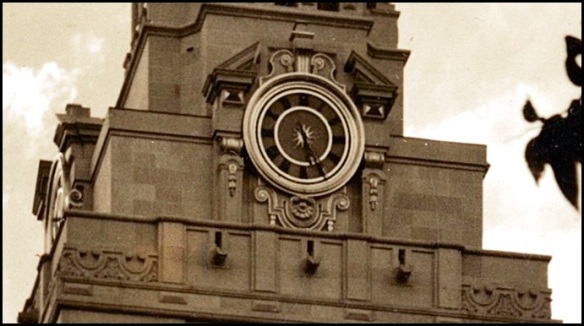 Above: A close-up view of the clock face.

What happened? The rough Texas weather took its toll. A review of photographs after 1938 show the gold leaf lasted for about 20 years, but by the late 1940s was already becoming spotty. It had disappeared entirely by the mid-1950s. 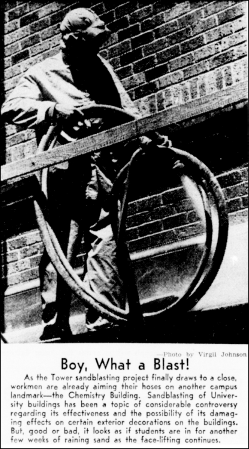 In the spring of 1966, both the Main Building and Welch Hall were sandblasted clean before objections were raised about the damage sandblasting would do to the limestone ornamentation. It likely erased any remaining traces of the original gold leaf, but we still have the photographic evidence to show us how UT’s iconic Tower originally appeared.

Left: A photo and caption from the May 15, 1966 issue of The Daily Texan. Click on the image for a larger view.