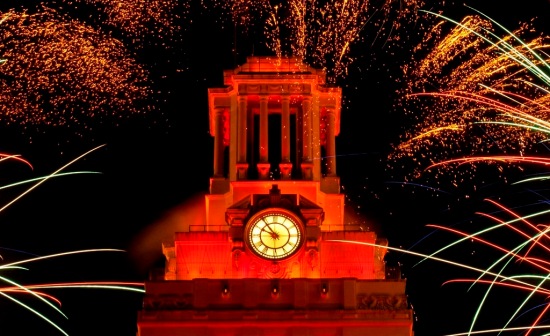 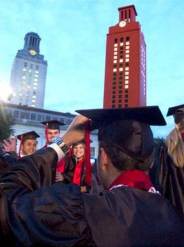 For the University of Texas, it’s the most important event of the year, the signature public affirmation of the University’s academic enterprise. Greater than any other college tradition, spring commencement is more than simply a rite. As is so often said about Texas, commencement is a state of mind. For two days in May, it casts a wide spell and seems to have a hold on everyone.

Right: Steven Hardt, a 2007 communication graduate, arrives on the Main Mall with an orange Tower perched on his mortar board. 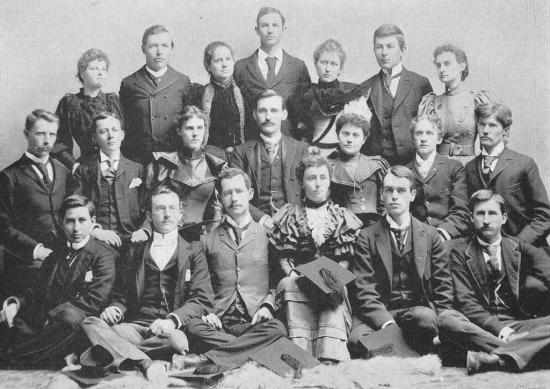 First held in June, 1884, the University’s earliest graduation ceremonies were modest affairs, staged in the un-air conditioned Millett Opera House downtown. They were scheduled either in the morning or later in the evening to avoid the early summer heat. Gentlemen arrived in three-piece suits, Ascot ties, and bowlers, while the ladies sported colorful bustle dresses and fashionable bonnets. Graduates were identified by the black-tasseled mortar boards on their heads.

Along with the presentation of diplomas, the ceremony was augmented by a pair of speeches delivered by members of UT’s two literary societies, the Rusk and Athenaeum. In 1885, Thomas Watt Gregory’s (left, and later namesake for Gregory Gym) half hour address made quite an impression as he optimistically described the march of social and scientific progress through the nineteenth century. “His speech from the beginning to the close was a grand and masterly one,” reported the Austin Statesman, “eschewing from his discourse the tinseled vaporings which generally characterize commencement efforts.”

When the auditorium in the old Main Building was completed in 1890, commencement moved to campus, and over the next decade grew into a week long celebration. Parties, dances, picnics, luncheons, and, occasionally, a symbolic textbook burning in front of Old Main all preceded the diploma ceremony. The alumni association held its annual meeting at the same time, elected officers for the next year, and organized class reunions.

In 1901, the senior Academic students – what today might be considered arts and sciences – voted to wear traditional caps and gowns to commencement for the first time. The law students, though, had been left out of the discussion, and, unhappy that they weren’t consulted, refused to

conform to the new dress code.  After UT President William Prather insisted that the law graduates wear some type of distinctive insignia, they opted to don light-colored suits with wild Texas sunflowers pinned to their lapels. Plentiful in the open fields around Austin, the sunflowers were at their peak in mid-June. A Daily Texan editor added some meaning to the choice: “As the sunflower always keeps its face to the sun, the lawyer turns to the light of justice.” A tradition was born. Today, UT law graduates still wear sunflowers.

Commencement moved outdoors in 1917. The state’s fire codes had recently been upgraded, and the auditorium was unexpectedly forced to close because of too few proper exits. Held on the warm and humid Tuesday morning of June 12th, just over 350 degree recipients – UT’s largest graduating class to date – gathered in front of the ivy-draped, Victorian Gothic old Main Building. The ceremony started bright and early at 8:30 a.m., before the Texas sun became unbearable.

Among the graduates were UT’s first nine recipients of the Bachelor of Business Administration degree. As with their law school counterparts, the business students decided to shun the cap and gown, and instead sported white linen suits with sweet peas as lapel flowers.

Above: 1937 Spring Commencement in Gregory Gym.

Over the next few decades, commencement roamed about the Forty Acres. It was held in the Texas Memorial Stadium in the 1920s, moved to Gregory Gym when that facility opened in 1930, and then returned to the front of the new Main Building and Tower in the late 1940s, when returning World War II veterans more than doubled UT’s enrollment in just a few months.

In 1995, UT President Bob Berdahl asked that the University-wide commencement ceremony be re-invented. While participation was still strong for the college and school events, attendance for the Main Mall graduation had suffered, in part, because the emphasis on hooding the Ph.D. candidates seemed to leave out the undergraduates. A separate ceremony was created for the Graduate School, and the University-wide event was refashioned to better include everyone, with more pomp and pageantry, and with the notable addition of fireworks. Within a few years, more than twenty thousand graduates and spectators annually converged on the South Mall.

Above left: The 1980 Spring Commencement. 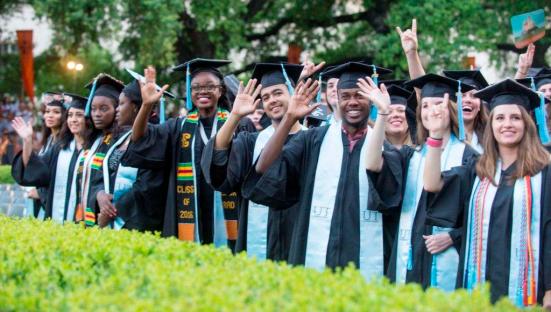 To the undergraduates, for whom their own commencement is often the first one to be witnessed, the modern ritual can pass as a blur of color, music, oratory, and pyrotechnics. The tops of mortar boards are decorated with UT icons, messages of future aspirations, and heartfelt thanks to parents. Deans brag with abandon about their schools and colleges. “If you have to go to a hospital,” chides the Dean of the School of Nursing, “you should hope that you’re being treated by a UT nurse!” The business school dean boasts, “Our degree programs are ranked in the top ten in the country!” All of it is loudly approved by the graduates. Throughout the night, the Main Building and Tower is bathed in a variety of special lighting effects until it bursts with color in the long-anticipated fireworks finale.

Much of the ceremony will seem deliberately out of touch with the twenty-first century, a purposeful nod to the medieval European ancestry of the modern university. Today’s caps and gowns are holdovers from the cappa clausa, the required academic dress centuries ago at Bologna, Paris, Oxford, and Cambridge. The tassels hanging from mortar boards and stoes draped over gowns are different colors, set by an agreed-upon international standard, to designate various fields of study. White is used by liberal arts, scarlet for communication, green for geosciences, citron for social work. Faculty members, most of whom earned their Ph.D. degrees from other universities, don the academic garb of their Alma Maters.

College maces, symbols of authority that were first used in the thirteenth century graduation processions of Oxford and Cambridge, are still carried at UT commencement. For each school and college, a pair of faculty marshals with maces conveys a single-file line of graduates up to the Main Mall at the start of the ceremony. Made from oak and brass, most of the University’s maces were created in the 1960s, and each bears images and emblems connected with a particular college. A mortar and pestle sits atop the College of Pharmacy mace, teaching certificates adorn the one used by the College of Education, and Alec, patron saint of the Texas Engineers, proudly stands on the mace for the Cockrell School.

Prominently hanging above the entrance to the Main Building is a large color rendition of the University of Texas seal, itself a longstanding tradition, when medieval universities needed official seals in order to conduct legal affairs. (The seals of a dozen other universities are permanently displayed on the Main Building.) Its Latin motto, Disciplina Praesidium Civitatis, comes from an 1838 speech by Mirabeau Lamar, a president of the Republic of Texas, who declared that a “cultivated mind is the guardian genius of democracy.” The use of Latin is a reminder of when the language was studied and spoken by university students in the Middle Ages.

Why is graduation called “commencement?” The word reflects the meaning of the Latin inceptio – a “beginning” – and was the name given to the initiation ceremony for scholars in medieval Europe. The original college degree certified that the bearer could instruct others in a given academic discipline. As part of the graduation ritual, which usually included a feast given by the graduate as a thank you to his professors and friends, the newly-minted scholar delivered his first lecture as a legitimate teacher. Commencement, then, means “commencing to teach.”

It’s a relatively straightforward task to describe the tangible features of the day: the colorful procession, the advice dispensed, and the cheers that accompany the fireworks launched from a bright orange Tower. But as mentioned before, commencement also casts a less definable spell. For the graduates, there is the excitement of a goal well-achieved, balanced with nostalgia as they become alumni. For the parents, it’s a joyous time with an undercurrent of relief. For the faculty and staff, the satisfaction of a job well-done, seen in the confident eyes of their former students who are about to go out into the world. All at once, it seems, youthful exuberance meets the sentiment of age.

And for everyone, surrounded by the symbols and traditions of ages past, there is a sense, if only fleeting, of sharing in the timeless succession of learning. From the ancient schools in China, India, and the Middle East, to the famed Library of Alexandria along the northern coast of Africa, to Plato’s Academy, and then on to the more modern progression of universities in Bologna, Paris, Oxford, and Cambridge, across the Atlantic to Harvard, and finally, on to  Austin.

Perhaps the true meaning of commencement, so deeply rooted in history, is that it still carries with it an eternal promise of new beginnings. 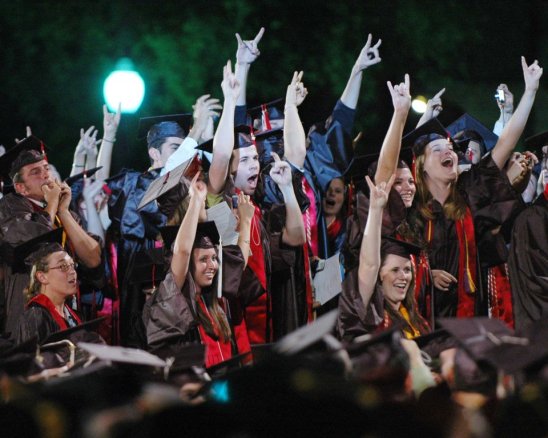 Note: Some of the images from recent UT commencement ceremonies are courtesy of the UT Austin account on Flickr and were photographed by Marsha Miller.