Above: A century ago, Spring Commencement was held on a June morning, on the northwest side of the old Main Building and protected from the early summer sun.

The University’s annual Spring Commencement draws tens of thousands to the Forty Acres. It’s a two-day extravaganza of school, college, and departmental ceremonies all over campus, culminating in a University-wide spectacle Saturday evening in front of the Tower. The deans brag about their schools and colleges, the University President congratulates both graduates and parents on their achievements, and fireworks are launched from the Tower to the delight of everyone.

Though not as grand in scale, the graduation schedule of 1912 was just as packed, and extended over four days in mid-June, starting with a Saturday all-University dance that began early, at 7:30 a.m, to take advantage of the relatively cool temperatures in the morning. A baccalaureate service was held Sunday, followed by Class Day ceremonies Monday morning, which featured the passing of gavels and other symbols of leadership on to next year’s senior class. The alumni association held their annual meeting and luncheon immediately afterward, and divided their ranks into three groups: the “Ancients” were those who had graduated among the University’s first 10 classes, 1884 – 1893; “Mediaevals” finished their degrees between 1894 and 1903; and “Old Timers” designated the rest. Each group had a special ribbon to wear for the week.

The alumni luncheon finished in time for attendees to stroll over to old Clark Field to watch the first-ever baseball game between the current Longhorn team and the alumni. UT grad Will Hogg, son of former Texas governor Jim Hogg (and for whom the Will C. Hogg Building is named), served as celebrity umpire. Coach Billy Disch arranged to borrow “baseball suits” from the local Austin Senators team so the alumni would have a uniform to wear. It didn’t help. Despite the stand-outs on the alumni roster, the Longhorns won the day.

But the day wasn’t yet finished. At 7:30 that evening, a crowd gathered on the campus for the popular student-alumni parade through downtown. Many in the group carried torches or vari-colored Chinese lanterns, and the parade included two brass bands and several floats. “After a thousand torch lights of red and green,” reported the Austin Daily Statesman, “the student body and the old time grads who are visiting, frisked around the campus and back again.” The procession ended on the northwest side of the old Main Building in front of a temporary wooden platform. There, graduating seniors put on vaudville acts, other students offered skits, and held yell leader Teddy Reese lead the group in some UT cheers and songs before the party ended late in the evening.

The official commencement ceremony, Tuesday morning at 10 a.m., was conducted at the same spot as the previous night’s gathering, in the shade behind Old Main. An elegant Final Ball that night at the Driskill Hotel concluded the week’s events. 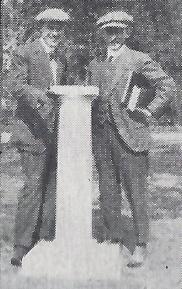 Sprinkled in between the cracks of a hectic schedule were plenty of receptions and other parties, and the formal dedication of a gift to the University from the Academic Class of 1912: a sundial (photo at left). With a marble pillar and a brass plate, it was placed about 100 feet south of the Woman’s Building – the first co-ed residence hall – so that it would have been seen along today’s West Mall.

Unfortunately, the sundial’s style, usually a triangular piece that casts a shadow on to the plate, wasn’t made for Austin’s latitude. “The time of day could not be determined to the nearest hour,” moaned Harry Benedict, then Dean of the Academic Department, “and the time of night could not be determined at all.” This made the sundial’s inscription, “Ye Know Not The Hour,” both redundant and superfluous.

Even worse, within a year, the style was broken off and taken outright, an act that reduced the inscription to being downright hilarious, and prompted accusations from College Station that “Texas has no style.” Despite the heartfelt intentions from the Class of 1912, the poor sundial was quietly removed, and has long since been lost.