With images of oranges (left) and pecans (right), Waggener Hall was originally home to the School of Business Administration.

Down the hill and to the east of Garrison Hall, standing proudly along Speedway Street, is Waggener Hall. The building was named for Leslie Waggener, a professor of English and one of the first eight members of the faculty when UT opened in 1883. Waggener served as faculty chair for a decade, and as president ad interim in 1895.

Dedicated on April 15, 1932 at a cost of about $350,000, Waggener Hall replaced a series of cheap wooden shacks that once lined Speedway. They were initially built as barracks for World War I, and were refitted ( poorly) as classrooms as enrollment soared after the war.

Designed to blend in with the familiar Mediterranean Renaissance style of other campus structures, Waggener Hall was constructed of white limestone, multi-colored brick, and a broad red-tile roof. The clean lines and sharp details were a welcome addition to the Forty Acres, and the twenty-six terra-cotta medallions that adorned its walls sent a clear message as to the purpose of the building. Each represented an export of Texas at the time: oil, cotton, lumber, corn, pecans, and cattle, among others.

The building was ostensibly designed for the School of Business Administration, but for several years had to share its quarters with the English, math, and public speaking departments, along with an anthropology museum housed on the top floor. Business Dean John Fitzgerald had a library room installed on the north end of the second floor, today used by the philosophy department. Un-air conditioned until the late 1950s, classrooms were outfitted with ceiling fans, and windows were opened on warm days. 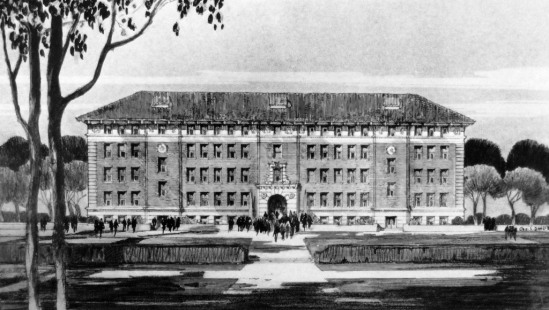 Above: An architectural rendering of Waggener Hall. 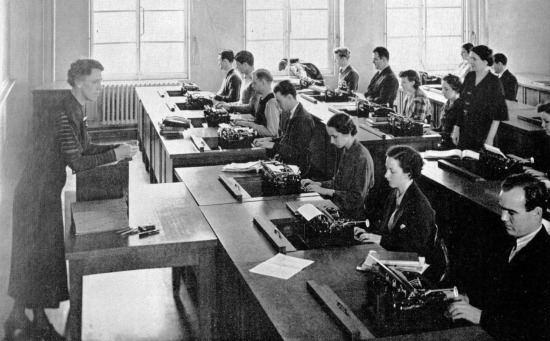 Above: Waggener Hall was home for business typing classes like this one in 1937.

Just under the eaves of the building are twenty-six terra-cotta representations of Texas exports. Some are easy to recognize: an oil rig, cotton, pecans, and peaches. But there is also a tree, meant to represent lumber, bees for honey, and bricks and a trowel to indicate masonry.

Above: The architectural drawing for a terra-cotta medallion to represent wheat. The final designs were often different from the initial concepts, now seen on the northeast corner of the building (image below).

Above: Cotton has long been an important product of Texas. While most of the building’s ornamentation is agricultural, if Waggener Hall were designed today, a very different series of exports would be represented.

Business moved next door to the more spacious Business-Economics Building in 1962, and the Waggener Hall was remodeled for other uses. Today, the departments of philosophy and classical studies call the building home, and an extensive Classics Library can be found on the first floor.

Above the doorways to the stairwells are signs that indicate Waggener Hall was once designated as a fallout shelter. A common sight on the campus at the height of the Cold War, these 1950s markers are among the very few that haven’t been removed or destroyed, and provide a layer of history to the building.

This ornate brass “faculty mail” box is found on the first floor, and is the last of its kind on the campus.

Above: Old and new. Waggener Hall was headquarters for the School of Business Administration for three decades until it moved into the Business-Economics Building (today’s Kozmetsky Business Center) in 1962. While Waggener is adorned with Texas products, the colorful ceramic pieces on the current business building are meant to be more abstract. Created by retired UT art professor Paul Hatgil, the rows of small, raised circles were meant to be reminiscent of buttons, as the many inventions of the 1950s had transformed the modern world into what was then called a “push button society.”