If you’ve been to the UT President’s Office recently, you can’t help but notice it in the western stairwell. (And if you haven’t seen it, I recommend a visit.) It’s been a popular, colorful addition to some new University publications, and has served as a backdrop for portraits of all types. It’s the Ashbel Smith stained glass window. Over a century old, it was almost lost in a spring hailstorm in 2008. This summer marks the fifth anniversary of its rescue and restoration.

A gift of the Ashbel Smith Literary Society, an all-female student group and one of several literary societies on the campus in the University’s infant years, the window was intended to honor the memory of Ashbel Smith, the first chair of the Board of Regents. It was officially presented on Friday, October 23, 1908, and installed in the west entrance to the old Main Building. A large crowd gathered in the hallway, the UT Violin Club provided music, and Miss Dolly Belle Rutherford of the Society and UT President Sidney Mezes headlined the program. The new window was generally well received, and the Texan student newspaper was downright enthusiastic: “Seriously, it is time that such gifts as [the window] be made to the University. It would be well for some of the other societies to follow the good start made by the Ashbel.”

The window itself was designed by Harry Goodhue of Cambridge, Massachusetts, one of three master artists who ignited an American revival of Medieval-styled stained glass windows in the early 20th century. Born in 1873 in Connecticut, Harry’s older brother was Bertram Goodue, a nationally renown architect known for his Gothic and Spanish Revival buildings, which included designs at Cal Tech and the University of Chicago, as well as the Nebraska State Capitol. Harry got his start creating windows for his older brother’s Gothic-styled churches.

When Old Main was razed in the mid-1930s and replaced by the current Main Building and Tower, the window was saved and installed in the stairwell between the third and fourth floors of the front section of the building. Originally, the Main Building served as the University’s central library, and the fourth floor housed the rare book collections. In the early 1970s, as the Harry Ransom Center became the rare book depository, President Stephen Spurr remodeled the floor as his office suite, and it has since remained the headquarters for UT presidents.

At some point in the mid-1980s – no one seems to know exactly when – the top part of the window, which featured a color rendition of the University seal, disappeared, and the remaining space was covered. The window was likely broken (perhaps by inclement weather), but it wasn’t reported in the news, and it’s been difficult to uncover any details. 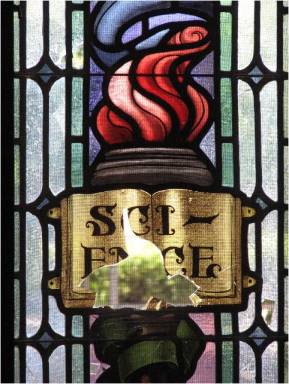 In May 2008, less than a week before spring commencement, a heavy thunderstorm rumbled through Austin, and brought with it enough large hail and wind to cause damage all over town. Campus landscapers, which had been getting the grounds spruced up for graduation, scrambled to clean up the blanket of leaves, twigs, and branches left by the storm. The hail severely damaged the greenhouse next to the Biological Sciences Building and punched holes in windows all over campus, particularly in the Tower. Unfortunately, the Ashbel Smith window was a casualty, as holes were punched in the remaining portions for Arts and Sciences.

To the rescue came the staff of the Campus Planning and Facilities Management office, which found a local contractor who not only could repair the damaged portions of the window, but could recreate the missing top section. Using photos and drawings from the University Archives at the Briscoe Center, the entire window was completed and re-installed in August 2008, a few months before its 100th anniversary. To guard against future hailstorms, a clear protective window was placed on the outside. 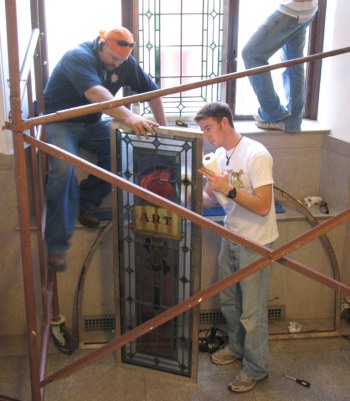 Above and below: August 2008 – The restored Arts and Sciences windows received a final cleaning before being returned to their familiar places. Click on the images for a larger view. All installation photos are courtesy of Dr. Fran Gale. 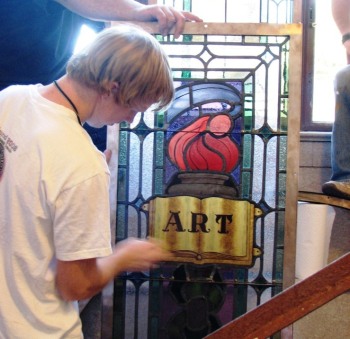 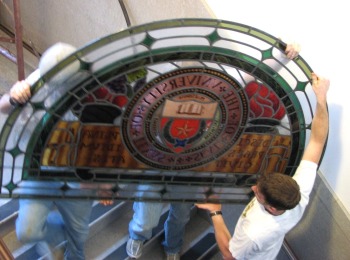 Carefully lifted up the stairs, a new top section, designed to replace the original missing since the 1980s, was recreated from images found in the University Archives. 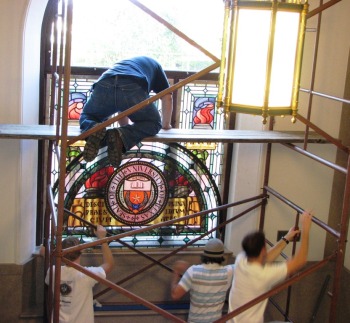 The installation crew had to maneuver in tight quarters in the small stairwell. 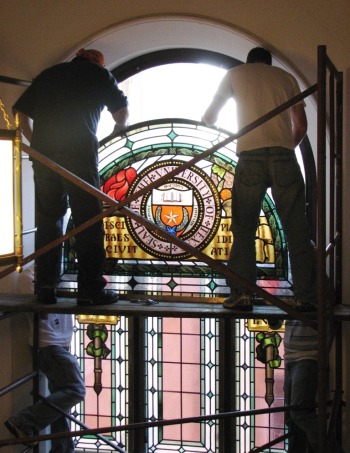 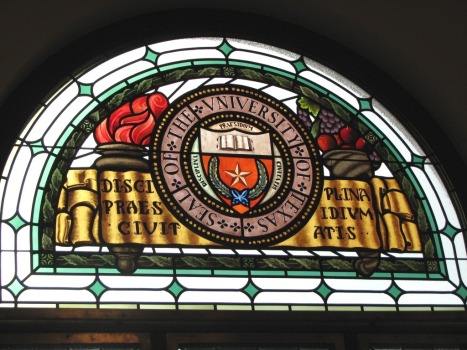 The top section features the University Seal and its motto: Disciplina Praesidium Civitatis. This is a Latin translation from a speech made by Republic of Texas President Mirabeau Lamar, “A cultivated mind is the guardian genius of democracy.” 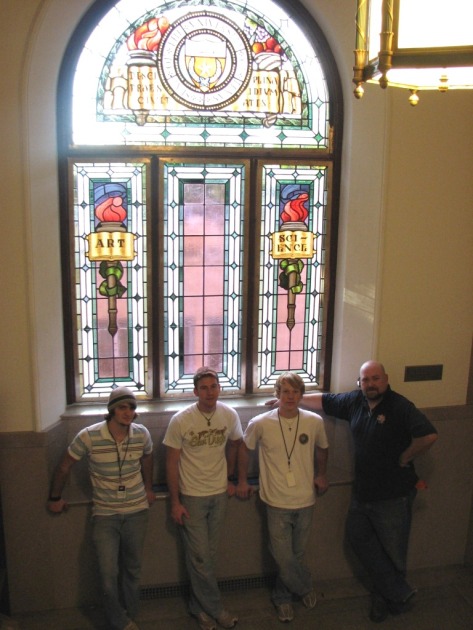 After more than two decades, the Ashbel Smith window was complete once again. The installation crew posed with the final product.

1 thought on “To Preserve a Window”