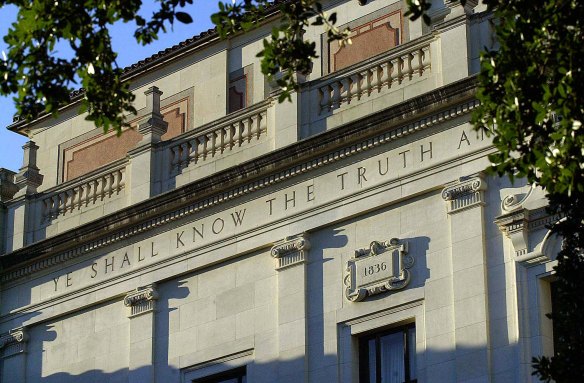 Above: Perhaps the most-read inscription on the University of Texas campus, “Ye shall know the truth and the truth shall make you free,” above the entrance to the Main Building.

“After much rumination,” wrote Dr. William Battle on April 10, 1935, “I suggest the following as an appropriate inscription for the front of New Library.” Battle chaired the Faculty Building Committee, and as the construction of the Main Building and Tower – which would serve as the University Library – was well underway, the committee needed to make decisions about some of the ornamentation. Specifically, the text for the signature engraving that would adorn the south façade of the building.

The choice was overdue. “I wrote you some time ago about the inscriptions for the Administration-Library building,” prodded architect Paul Cret the previous December, “and to determine the size of the letters, joining of the stones, etc., we need the ne varietur text of the frieze inscription of the south elevation.” The ne varietur, or “not to be altered” script could be up to 108 letters and spaces in length, either one sentence or two, though as the design called for the inscription to be divided by a rendering of the University seal in the middle, Cret advised that it would be “difficult to find two suitable sentences of the same length. We feel that a single sentence gives more leeway.”

Above: The south elevation of the Main Building, designed by architect Paul Cret. Click on the image for a larger version. Source is listed below.

Battle, who had joined the faculty as a professor of Greek and classical studies in 1893, was highly respected on the Forty Acres. He’d served as Dean of the University (today’s Office of the Provost) and Acting President, created the UT seal, founded the University Co-op, and initiated a campus directory. His greatest contribution, though, was to chair the Faculty Building Committee from 1920 – 1948. Battle’s lifelong interest in architecture was almost as great as his fascination with Ancient Greece and Rome, and he took great care to ensure that the design of the campus and its buildings were both appropriate to their setting in Texas, and reflected the high aspirations of the University. When considering the text of the primary inscription on what was intended to be the iconic building of the University of Texas, Battle was not to be rushed.

“The records of the past shall give light and courage to them that come after.”

As Battle explained, “This seems to me to really convey the purpose of the Library and what should be its result. The words carry a formal, rather stately manner suggested obviously in the King James version of the Bible.” The sentence was Battle’s own creation, not a biblical quote, and he hoped it would evoke a similar gravitas. “The locution ‘them that come after’ by its ancient flavor ought to stick in the memory,” Battle explained.

The proposal garnered a less-than-enthusiastic response from the committee, but Battle had such stature and influence on the campus that many on the committee were reluctant to voice their opinions directly. Instead, they asked fellow committee member John Calhoun for help.

A longtime friend and trusted colleague, Calhoun was a UT graduate who joined the mathematics faculty in 1909, was appointed the University’s comptroller in 1925, and later served as president ad interim. Passionate about the oak tree, Calhoun was primarily responsible for the planting of live oaks around the perimeter of the Forty Acres, along the South Mall, and elsewhere on the campus. In the 1950s, he created a valuable detailed map of every tree and its history, still used by UT’s Office of Landscape Services. Calhoun Hall on the South Mall is named for him.

Calhoun penned a tactful letter to Battle. “After pondering for some little time over your suggested inscription,” he wrote, “I have tried my hand a little to see whether or not there might be some slight change made, keeping the idea, which I think excellent, intact. The reason that I think some change might be considered is the fact that in your inscription you say that ‘records’ shall give ‘light’, and while records are frequently enlightening it seemed to me that the metaphor is a little strained.”

Battle appreciated the feedback, but was rather attached to his initial idea. He acquiesced a little and changed the phrase “shall give light and courage” to “shall bring light and courage,” but that was as much as he was willing to concede. In an effort to bring Battle around, Calhoun provided an alternative, “Ye shall know the truth and the truth shall set you free,” found in the Book of John in the Bible.

A month passed before Battle returned to the topic. “Had we not better be reaching some conclusion as to the inscription on the front of the Library?” he wrote the committee on May 14th. “It seems highly appropriate for the inscription to indicate the character of the building as a library.”

Battle repeated his initial submission, but partially conceded,” I still think my first suggestion good, but I am not sure if the second is not after all preferable: Ye shall know the truth and the truth shall make you free, or, Cognoscetis Veritatem et veritas liberabit vos.” The last was a Latin translation.

Battle continued, “Truth and freedom are so essentially the foundation of education, character, and progress that the injunction to seek truth as a means to freedom is as splendid a call to youth as we can make. Its form is perfect, its source is not a drawback, and it has the weight of nearly two thousand years acceptation.”

The biblical quote was brief, inspiring, and easily understood. And from a practical angle, it was composed of two clauses and twelve words, which fit well for the elevation design.

The committee met May 20, 1935 to make a decision. Battle handed each member a sheet of paper with three choices, though from the wording he seemed to still be encouraging his initial creation. The page read:

In the end, the committee favored the English version from the Book of John. With UT President Harry Benedict’s support, the Board of Regents gave its official approval on September 28th. 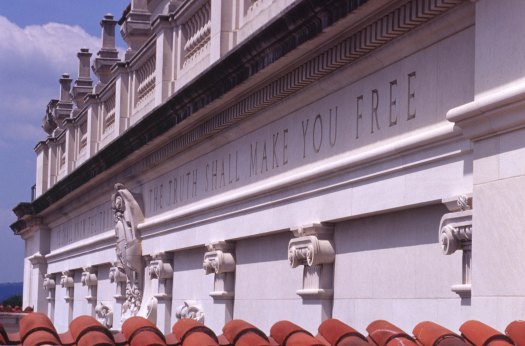 2 thoughts on “The Inscription”