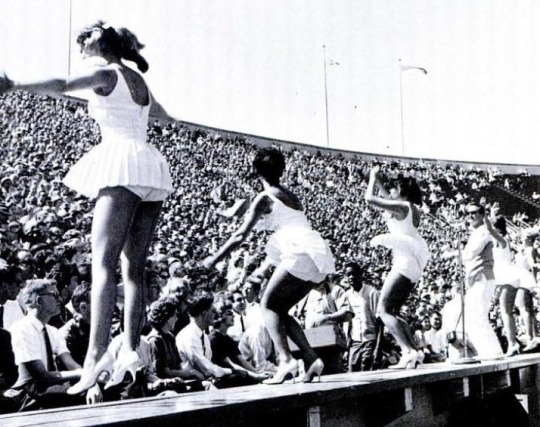 Above: UT alumnus Bill Bates (fourth from left) and the cheerleaders he recruited for the 1961 Texas vs. Cal football game in Berkeley. Oh my…

The 1961 Texas Longhorns were ranked 4th nationally as they prepared for their season opener against the Cal Golden Bears. Expectations were high, but both head coaches – Mark Levy for Cal and Darrell Royal for Texas – knew very well that first games often came with surprises.

Texas fans, excited about their prospects, planned to be at California Memorial Stadium in droves. The UT alumni association chartered its first ever football excursion. A package price of just under $200 included round-trip airfare, two nights stay at a San Francisco hotel, ground transportation to Berkeley, and a ticket to the game. Also scheduled was a pre-game reception at Cal’s Alumni House. UT alumni president John Holmes was so taken by the facility, it inspired him to spearhead an effort to build an alumni center in Austin, which opened in 1965. (See: The Alumni Center Turns 50!)

Above: Five of the members of the 1961 UT cheerleading team.

Notably missing from the game, however, were the Longhorn Band and Texas cheerleading squad. At the time, there simply weren’t enough funds in the athletic department’s coffers to help fly the students out to the Golden State. This meant that UT fans would be, well, leaderless, as far as cheering was concerned.

Enter Bill Bates.Originally from Tyler, Texas, Bates transferred to UT for his junior and senior years, 1949-1951. An art major, he had classes with Fess Parker (who would become famous as Disney’s Davy Crockett as well as the Daniel Boone TV series), and for a time dated Cathy Grandstaff, the future Mrs. Bing Crosby. A UT cheerleader, Bates was also a artist for The Daily Texan. He would later travel the world as artist-in-residence for Royal Viking Cruise Ships, then settle in Carmel, California as a cartoonist for the local Carmel Pine Cone. Twice Bates was a finalist for the Pulitzer Prize. He passed away in 2009, survived by his wife and daughter.

In 1961, the 31-year old Bates was just getting his start as a cartoonist for The San Francisco Examiner, and was very disappointed that the UT cheerleaders wouldn’t be present for the all important Texas vs. Cal game. What to do? What any resourceful Texas Longhorn would do, of course. Get replacements. And not some run-of-the-mill substitutes, either. Just as UT strives to be a university of the first class, Bates went looking for the best stand-in cheerleaders he could find. 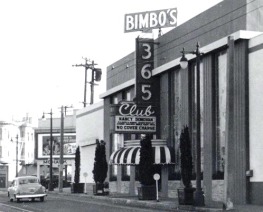 Bates was a regular at Bimbo’s 365 Club (photo at left), a nationally known San Francisco nightclub. Founded in 1931 by Italian immigrant Agostino Giuntoli – nicknamed “Bimbo” by friends who had trouble pronouncing his name. (Unlike the current American slang, “bimbo” comes from the Italian “bambino,” a young boy. The nickname was fairly common.) The 365 Club was a place to see and be seen through much of the 20th century. Hollywood celebrities were frequent customers. Rita Cansino, better known as the actress Rita Hayworth, was discovered there. Now more than 80 years old, the 365 Club continues to thrive in downtown San Francisco.

In the 1960s, among its varied nightclub acts, the Club was also known for its leggy chorus line, something like the New York Rockettes. Bates spoke with Bimbo about his problem, a deal was made, and Bates hired six members of the chorus line to be substitute UT cheerleaders for a day.

The weather was perfect for the 1:30 p.m. kick-off on Saturday, September 23, 1961. Clear, sunny California skies and 70 degrees greeted the 41,500 fans at Cal Stadium. Exactly how Bates won permission to bring his cheerleading squad into the stadium isn’t known, but the girls lined up in front of the Texas fans in white, low-neck dresses and high heels, and, having practiced with Bates beforehand, began to lead the crowd in traditional UT yells.

A football game was taking place on the field, but a good many fans – and players – were more than a little distracted by the spectacle on the sidelines. “University of Texas rooters more or less disrupted the Cal – Texas football game Saturday by hiring a half dozen chorus girls from a San Francisco night club to act as cheerleaders,” reported The Los Angeles Times (photo right). “The girls, scantily clad in lowcut playsuits and wearing high heels, attracted nearly as much attention from the fans as did the football players.During the times-out and half-time ceremonies, thousands of binoculars stayed glued on the field to watch the girls,” which likely included the reporter. “At halftime a mob scene developed where the dancers were sitting as thousands of college students gathered around just to look.”

As the Longhorn offense began to take control of the game, The Dallas Morning News related, “There wasn’t much for the California partisans to cheer and they spent a good bit of the time ogling Bimbo’s sextet, even though the girls were ostensibly leading the cheering of a band of Texans who came here to root the Longhorns home.” The Austin Statesman called the group “Texas’ Twelfth Man” and Bate’s “secret weapon . . . The strategy worked fine.” United Press International (UPI) snapped a few photos and sent the story out on the news wires. National television newscasts discussed it on their nighttime broadcasts, and Sports Illustrated mentioned it in its next issue.

Above: Not the best quality image (it’s from microfilm), but one of the UPI photos and cutlines sent out on newswires across the country.

Oh, and the game? The Texas Longhorns overwhelmed the Golden Bears, 28 – 3. 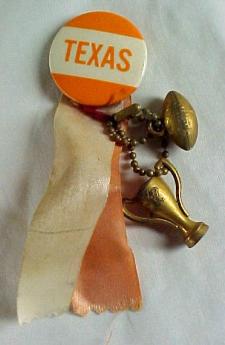 When it’s time for kick-off, how do you show your team colors? Football fashions have been around as long as, well, football itself. In the 1880s and 1890s, fans going to a game pinned colored ribbons to their lapels to show which team they supported, though the guys often sported longer ribbons to be sure they’d have extra to share with a pretty girl who had none.

By the 1950s, ribbons were still being worn, though though they were more popular with the co-eds. Some were solid color ribbons attached with a team button (see photo at left), and perhaps decorated with “football charms” – tiny footballs, helmets, megaphones, or trophies.

At the University of Texas, paper ribbons printed with a catchy phrase about the day’s opponent were also popular. Pinned to a shirt or blouse, the ribbons were simply strips cut from a regular 8 1/2 x 11 sheet of paper. The University Co-op sponsored the printing costs, and the ribbons were distributed in front of the entrances of the stadium as fans arrived for the game. Below is a sampling from the 1950s and 60s. (Click on an image for a larger view.)

Above, from left. Paper ribbons used for home games against Texas A&M, when the annual Thanksgiving Day game was often billed as the Tea-Sips vs. the Farmers, rather than Longhorns and Aggies; Oklahoma Sooners (Who else?); Rice Owls; and the TCU Horned Frogs. The “T” and longhorn logo at the bottom was used for only a few years in the early 1950s. The “yelling Bevo” icon was first appeared in 1953.

Above, from left. An early 1950s ribbon for a Texas Tech game; from the 1964 Texas vs. Army bout in Memorial Stadium (UT won 17-6.); Oklahoma State was a non-conference opponent in 1963, when Texas went undefeated and claimed its first national football championship; in 1953, third ranked Baylor came to Austin, but UT students had been burning red candles to hex the Bears. Baylor fell 21-20. 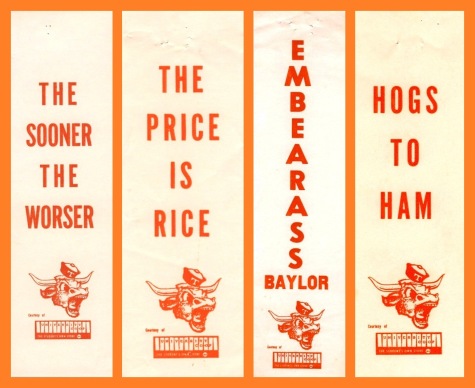 Above, from left. Click on an image for a larger view, and you can still see the holes at the top where the ribbons were pinned. These are from the 1950s and 60s for games against Oklahoma, as well as Southwest Conference opponents Rice, Baylor, and Arkansas.