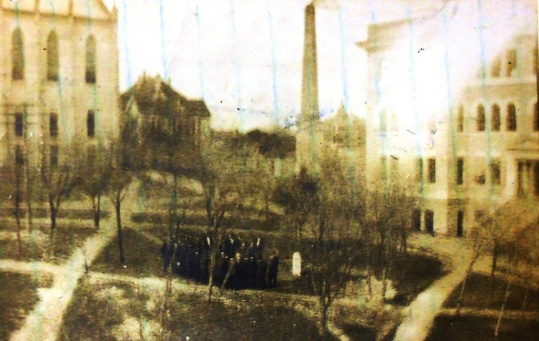 Above: Students hold a funeral service for the beloved “George Town.” Buildings from left: north wing of Old Main, Chemistry Lab Building (burned in the 1920s, where the biology ponds are today), smoke stack of the first power house, Littlefield Home in the distance, and the newly finished Engineering Building (now the Gebauer Building). Click on the image for a larger view.

At first glance, the image is a somber scene. It’s grainy and poorly focused. A lack of shadows suggests it was a gloomy, overcast day, and the mostly barren trees imply the photograph was taken in winter or early spring. At the center, a group of about twenty-five men, dressed in dark suits and hats, have solemnly gathered in front of what looks like a gravestone. But don’t be fooled, as this was no ordinary memorial service. The hurried photographer captured one of those rare student shenanigans: a funeral for an outhouse.

In April, 1900, when severe storms and flood waters destroyed the original Austin Dam (since replaced by the Tom Miller Dam), the city’s water supply and, in turn, the sewer system, were unreliable for several years. Of course, this affected everyone on campus, especially the occupants of B. Hall, the University’s first residence hall for men. As a proactive measure, temporary restroom facilities were built just west of the dorm.

Made of brick with a simple wooden roof, most agreed the outhouse was an eyesore, though according to UT student Victor “Dutch” Lieb, “It was sort of an institution.” The building was dubbed “Georgetown,” not as a slight to the city thirty miles north of Austin, but to poke fun at Southwestern University. In 1885, UT played its first ever baseball game in Georgetown against Southwestern. The game didn’t go well for UT, though it brought about the first appearance of orange and white as the University’s colors. Since then, UT and Southwestern had maintained a spirited baseball rivalry. (Given the feelings most Longhorns have about the University of Oklahoma, a similar temporary facility on campus today might lovingly be called “Norman.”)

By 1904, University officials thought the outhouse was no longer needed, and over the week-long break for Christmas holidays, a few students who’d remained in Austin were recruited to raze the structure with the help of a telephone pole battering ram. When B. Hall residents returned after the New Year, they discovered their institution gone, but not forgotten. 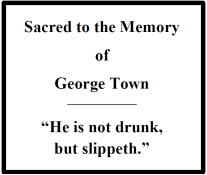 Shortly after spring classes were underway, Lieb and fellow engineering student Alf Toombs decided to honor the privy’s passing with a formal ceremony. “It took about ten seconds in those days to organize a funeral cortege,” Toombs later recalled. “Dutch was the sky-pilot and I was the choir leader.” Lieb fashioned a large wooden marker with the painted epitaph: “Sacred to the memory of George Town. He is not drunk, but slippeth.” Meanwhile, Toombs recruited the funeral party. When all was ready, the group formed two columns, then marched out from the newly finished Engineering Building (today’s Gebauer Building) while singing the well-known and venerable hymn, “Nero, My Dog, Has Fleas.”

Once assembled in front of the marker, “Reverend Dutch” uttered a short prayer, led another song, then turned the program over to Toombs, who eloquently expounded upon the virtues of the late Mr. Town and his unselfish devotion to mankind. Toombs described at length how “George” had been “a sheltering friend to many in need, at times of their most poignant distress.” Apparently the eulogy brought tears to the eyes of many of the listeners.

Early spring flowers, swiped from groundskeeper Harry Beck’s campus gardens, were laid on the ground in front of the marker. The ceremony concluded, Toombs remembered, “We left the hallowed spot with the consciousness that another worthy deed had been done where so many had been done before.” The group made their way to Weilbacher’s Confectionary and Soda Fountain downtown to drink a toast to the dearly departed.

Above: Victor Lieb and Alf Toombs lead a memorial service for the late “George Town.”